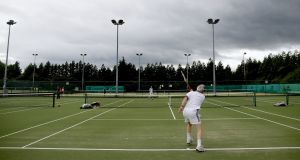 Tennis Ireland say clubs around the country can remain open with strict protocols in place as per their interpretation of the government’s Level 5 Covid-19 restrictions.

On Wednesday, Tennis Ireland’s chief executive Richard Fahey told The Irish Times they were hoping that, if the government apply their own protocols in relation to the Covid-19 pandemic, tennis clubs will be able to remain open as the country moves to a Level 5 lockdown.

He explained: “We have put forward a proposal to Sport Ireland’s expert group to say that we can manage this safely and that our clubs have demonstrated right from the re-opening we were able to do it with a very high level of compliance and maturity. We outlined what we believe should be able to happen at Level 5. We are waiting to hear back and have nothing yet.”

As the Wednesday midnight deadline for Level 5 lockdown approached, clubs were clamouring for detail and late in the evening Tennis Ireland released a statement saying that “having considered very carefully the Government’s Framework for Living with Covid-19 and the protocols within it, and in the absence of more specific guidance from Government, the Board of Tennis Ireland’s interpretation is as follows and will be in place until further clarification is forthcoming.”

Earlier the organisation said that they are not asking the government to change or break from existing guidelines but rather just to clarify that tennis is possible under those rules.

One aspect of their argument is that while swimming pools, leisure centres and gyms are to close under Level 5, the guidelines don’t specifically refer to tennis clubs and there has been no direct communication from the government to Tennis Ireland to close the clubs down.

Fahey continued: “Tennis clubs can’t really close if we are going to be in a position to provide younger players, school age children with the opportunity to train or play. While there is no specific guidance around adults, the guidelines use the words ‘training or matches.’

“If you look at the government guidelines there is a section in it, social and family gatherings. Within that it basically permits people to meet up with one other person from another household for exercise. The vast majority of adults who play tennis don’t go to train; not like football or GAA or rugby. They go down to play which is their choice of exercise.

“From our point of view, and this is what I have been trying to put to Sport Ireland, we should be allowed to play. We have demonstrated that we are able to be compliant with Covid-19 protocols, that we can maintain social distance because we are a non-contact sport but also if you are allowing kids to play in a safe environment why can’t adults play in a safe environment?”

The tenet of the argument seems to be that, for 99 per cent of adult tennis players in clubs, tennis is not about training or matches but is instead a chosen form or exercise in the same way that others go for a run or a cycle. The government guidelines were largely written around team sport and focused on training and matches.

In a climate where many aspects of people’s lives have been severely curtailed it seems a disproportionate response to chip away further at a sport that can remain compliant in Level 5 and provides an important outlet in terms of the physical and mental wellbeing for those that participate.