From war to the Yankees to Aughrim: Mike Burke’s remarkable life 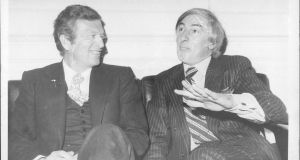 Mike Burke and Ernest Hemingway were in an apartment in Paris, drinking and talking football late into a November night in 1944. Burke mentioned he’d once been a good enough prospect at the University of Pennsylvania to be signed by the Philadelphia Eagles for $125 per week. A rookie mistake. Papa’s own grid-iron career stalled in high school but, even in his mid-forties, nursing a paunch, he remained a slave to his own machismo and fancied his ability to tackle anybody.

“I could lay you low, you skinny half-back,” he declared.

“No you couldn’t,” said Burke.

Moments later, the combatants had repaired to the cobblestones of Montmartre, Burke cradling an empty wine bottle under his oxter in lieu of a football, the world’s most famous war correspondent assuming a linebacker’s three-point stance, poised to strike. A naval officer in peak physical condition, the 28-year-old one-time collegiate running back easily juked past the flailing author and Hemingway tore his clothes sprawling in a giddy heap on the street, laughing at the absurdity of his own efforts.

The pair had met and become lifelong friends over a gin and tonic-laced fried breakfast in Limerick earlier in the war, the transatlantic boat plane bringing them to England landing on the River Shannon at Foynes. While Hemingway famously liberated the Ritz Hotel as the Allies took back Paris, Burke fought for months with the French Resistance in Haute-Saône, parachuting behind enemy lines to link up with the Maquis de Confracourt near the Vosges Mountains. A military career of some distinction, it earned him the Navy Cross, the Silver Star, the Médaille de la Résistance and, in the post-war years, a lucrative role as script consultant on the Gary Cooper movie “Cloak and Dagger”.

Burke’s name has been taken in vain around New York this past week. The Yankees’ now annual failure to reach baseball’s World Series prompted the usual bout of hand-wringing and inevitable comparisons with other historically bad eras in the club’s history. The seven fallow years Burke was in charge between 1966 and 1973 always feature in that discussion. Woefully uncompetitive, his greatest achievement as president was refurbishing the tumbledown stadium, rebuffing a serious attempt to relocate to New Jersey, and getting Paul Simon to throw out a ceremonial first pitch.

Every fresh mention of Burke’s name though brings to mind his rather extraordinary biography. After handing the reins of Yankee Stadium over to the legendary George Steinbrenner, he took over the New York Knicks and Madison Square Garden, where, among other achievements, he once waded into the seats to invite an abusive fan outside and promoted Ali-Frazier II. Burke retired in 1981 to a 500-acre farm in Aughrim, needing time and space to write his memoirs because, in between riding with the East Galway hunt and tooling around the chicanes of Ballinasloe in his DeLorean, he had quite a story to tell.

“The last of the Renaissance men,” is how Richard Helms, his former boss at the CIA, described him. “A jock who has read a book.”

He’d worked for the agency when it was still the Office for Strategic Services (OSS) in post-war Europe, handpicked for the job due to his heroics in German-occupied France and some earlier derring-do involving dressing as an Italian peasant to spirit a coveted anti-Mussolini admiral off the island of Capri to a safe house in the Tunisian Casbah.

While busy trying to foment revolution in communist Albania, the sleuthing Burke often broke bread with the infamous English spy Kim Philby. Getting called a bum by irate Yankee fans from the bleachers was always going to be small beer to somebody who had to live with the fact he’d unwittingly sent several Albanian nationalists back to their homeland to die because Philby was a double-agent working for the Soviets.

Burke’s was that kind of life, casually pinballing through history, bouncing off names that defined epochs. Before the Yankees’ gig, Burke managed Ringling Brothers Barnum & Bailey Circus. His arrival coincided with the Teamsters Union wanting a slice of the action, a demand freighted by death threats and a series of unfortunate accidents as the mob put the squeeze on. It culminated in a fraught showdown with Jimmy Hoffa in a Miami hotel. A man who pitched himself to President John F Kennedy as a potential head of the CIA after the Bay of Pigs’ debacle was hardly going to be cowed by a hoodlum in a suit.

After two divorces (he wed his first wife, the model Faith Long, while he was still in college) and decades in the media spotlight, the anonymity of Ireland appealed to him. A frequent visitor all his life, his attachment to the place was ancestral, the Burkes came from Galway and the Flemings, his mother’s side, from Kerry, and typically romantic.

“Irishry in our family runs centuries deep, in myth and mist, pride and prejudice,” he wrote in the appropriately-titled “Outrageous Good Fortune”.

Before dying from cancer in Dublin in 1987, he often returned to New York to catch up with his four children and friends like Kurt Vonnegut and Howard Cosell, the iconic broadcaster who delivered the eulogy at his funeral in St. Patrick’s Cathedral.

“Are you a gentleman farmer over in Ireland?” a socialite asked Burke in the Algonquin Hotel one evening.

That and so much more.

Unbeaten Khabib to retire after UFC 254 win over Gaethje 10:12
Justin Thomas finishes with a kick to lead by one in California 07:46
Ulster aiming to douse Dragons’ fire and extend unbeaten start 06:00
A season like no other: The key games that helped Shamrock Rovers secure an 18th title 00:18
Liverpool come from behind to beat Sheffield United 00:19
Here is your handy guide to sport on television this week