Website with 2,500 extra places crashed for a number of people looking to enter 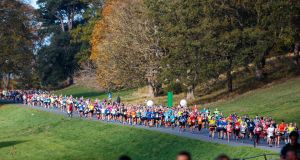 Competitors in the Phoenix Park during the 2018 Dublin Marathon. Photo: Bryan Keane/Inpho

Organisers of the KBC Dublin Marathon have admitted there were “some technical difficulties” when the additional 2,500 entries for the October event went on sale this morning.

After initial demand quickly outpaced supply, an extra 2,500 places were announced back in February, increasing the overall entry to another record high of 22,500.

These went on sale at 9am this morning, via the event website and Eventmaster, and again the demand fast outpaced supply. By 10.30am a statement from KBC Dublin Marathon confirmed all additional entries had sold out, although some had experienced a crash in the event website.

“We know that many of you are disappointed not to have secured an entry,” they said: “We had over 8,000 vying for 2,500 entries which led to some technical difficulties with Eventmaster often encountered during peak demand.”

The additional numbers were announced after a short window for entry returns, given the initial 20,000 limit sold out in just 40 days, back in early December, partly spurred by 2019 being the 40th anniversary of event. The race entries, as usual, opened once the 2018 event had concluded.

Set for Sunday October 27th, Jim Aughney, in his 22nd year as Dublin Marathon race director, said at the time the high demand for 2019 was both surprising and satisfying, the additional places given careful consideration: the four ‘wave’ or staggered starts will extend from 15 to 20 minutes apart, as the emphasis is still on quality over quantity.

Aughney also said: “We didn’t just rock up to Dublin City Council and the Garda and say we need another 2,500 entries. We had to show them how exactly we would cope, and would cope safely, and the main way of doing that was to increase the break in the wave starts from 15 minutes to 20 minutes, spreading the 2,500 across the four waves, which won’t actually impact much on our peak at the start on Merrion Square, which is crucial for us.

“I’ve no doubt we could sell 25,000 entries, maybe more, but that would start to impact on quality, beginning with the race Expo, getting through the finish, all that. So we still have to control the numbers, and we’re happy with the 22,500.”

Judging by this morning’s demand, that 25,000 number could easily have been exceed; however the organisers are intent on keeping the numbers manageable.

In 2016 the event was moved from its traditional Bank Holiday Monday to the Sunday, which Aughney said directly contributed to the first sell-out of runners of 19,500, a 30 per cent increase on 2015. “We’d a few lucky breaks along the way since 1997, and thankfully numbers have been on the increase ever since,” said Aughney.

By 1982, the third Dublin marathon drew 11,076 entries; this year’s race will also mark the first of the new three-year sponsorship with KBC Bank. First staged in 1980 with an entry of 2,100, Dublin is now the fifth largest big city marathon in Europe.

1 LeBron James among those to slam Drew Brees’ anthem comments
2 How a GAA club sprang up in east Belfast over Sunday breakfast
3 GAA players spend just 2.5 seconds within 2m of each other during play
4 Social distancing takes a back seat as fans return in Hungary
5 Eoin Murchan on being the wrong player in the right place at the right time
Real news has value SUBSCRIBE