Ashleigh Barty now living up to all her earlier promise 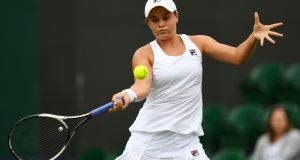 Ashleigh Barty: “It is always a goal to try and be the best. It’s ultimately why we train, why we compete and play, but for it to happen in this way has been amazing.” Photograph: Shaun Botterill/Getty

Two years ago Australian Margaret Court came out with a view that would redefine her to the millions, who did not know of her record 24 Grand Slam wins. Court, 74, a senior pastor at Perth’s Victory Life church claimed “tennis is full of lesbians” .

Following a row over remarks she made previously about gay marriage, she added that transgender children were the work of “the devil”.

“Tennis is full of lesbians. Even when I was playing there were only a couple there but those couple led took young ones into parties,” said Court.

Court, who has a stadium named after her at the Australian Open venue, found herself on the wrong side of the chalk as Australian player sentiment stood united in opposition to her views. Among those expressing support for marriage equality were Australian men’s number one Nick Kyrgios and Ashleigh Barty.

It was most extraordinary. I asked ‘are you sure you haven’t played before?’ And she said just with her dad in the backyard

In 2017 Barty’s name was largely unknown outside her own country. But making the decision to stand up to and oppose Court was strikingly typical of a player only now living up to her earlier promise as a tennis prodigy and Junior Wimbledon champion at the age of 15.

The tennis world saw her coming from a long way off. But it had no idea how she would stand the traditional tennis grooming process on its head, when after the 2014 US Open as an 18-year-old she walked away from the game.

The 2014 season was one in which Barty had only one main draw singles win. She played in three Grand Slam main draws, including at the US Open where she had to qualify, but lost all of her first round matches.

Ranked outside of the top 200 in singles, the top 40 in doubles and disillusioned about the future, Barty made the decision to step off the professional tour, a move fully supported by her parents and coaches.

“It was too much too quickly for me as I’ve been travelling from quite a young age . . . I wanted to experience life as a normal teenage girl and have some normal experiences,” she later explained.

“I needed some time to refresh mentally more than anything. It became a bit of a slog for me and I wasn’t enjoying my tennis as much as I would have liked to.”

But she never threw away the racquet. The love didn’t totally die. It receded. Then shortly after a meeting the Australian women’s cricket team in early 2015, intrigue entered her life with the prospect of playing a team game after so many years facing opponents alone.

Barty later approached Queensland Cricket about how she could get involved. Almost instantly Andy Richards, the coach of the Queensland Fire recognised the new recruit as a preternatural talent.

“For somebody who had never worn a set of pads or gloves, never had a real cricket bat, never batted in a helmet, I fed her probably 150 balls and she missed maybe two to three, probably mistimed six or eight and the rest she hit flush,” Richards told Fox Sports recently.

“We have had people come across from other sports, but none even close to her in terms of ability to transfer skills. Going from a cross-bat sport to what is essentially a vertical-bat sport, she was incredible.”

Barty played with Western Suburbs and after her second game signed with the Heat for the inaugural Women’s Big Bash League (WBBL) Twenty20 season. Within months of leaving tennis and with no cricket back ground, she had become a professional.

“Without a doubt, another 12 months if she continued playing cricket she could definitely have played for Australia,” added Richards. “I have no doubt that if she stayed in cricket she would have been in England for the Ashes.”

Barty brushed aside Czech teen Marketa Vondrousova in straight sets and dropped only four games to win in Roland Garros a few weeks ago. It came just three years after returning to tennis with a world ranking of 623.

Even now with a more secure status there is little doubt in her head that the cricket team environment and locker room unity of purpose made her a stronger tennis player, if only to provide a support mechanism at a time of her life when it was desperately needed. Barty took medication for depression for two years and used therapy to become healthy. Her father also suffered from depression.

“They accepted me, and they got to know Ash Barty,” she said last week. “They got to know me. I still have those relationships to this very day. The way they are accepting of someone new coming into their locker room, into their dressing room and into their sport was amazing.”

Now the world number one, the second phase of her career has been equally extraordinary and perhaps in the way it unfolded there is an old script dusted down, a reminder of how young talent instead of being hot housed and pushed should be de-stressed and rested. They should follow what bodies and minds telling them to do.

More than a blinkered, red-hot determination to cut a swath through the sport, Barty’s return has been driven by optimism and rediscovered enthusiasm for tennis.

Her own desires and ambitions alone have pushed her. In the end a holistic view of professional tennis considering both her life and career in equal measure has won through.

Barty returned to singles in late May 2016. She qualified for Eastbourne, a mid-level ITF event, where she made it to the semi-finals in both singles and doubles. The following week, she returned to the WTA Tour, where she qualified for the Nottingham Open, making the quarter-final and narrowly losing to top seed Karolína Plíšková.

Following a bone stress injury she played only one more event that year. By the end of 2017, never having been ranked in the top 100 in singles, she ended the year inside the top 20 and with her doubles partner Dellacqua reached the quarter-finals or better at three out of four Grand Slams.

Now tennis has a player, who not only confronts those with whom she disagrees like Court or takes potentially career ending decisions but also a stylist more in the mould of Martina Hingis than the hard hitting baseliners who have lined up to rule the world.

At under 5ft5’in (166 cm), she is one of the smallest players on the tour. That means she must think more than others and use a wide skill set to play a varied game. Crafty is a word often used to describe how she depowers opponents.

Despite her size, Barty is also one of the best servers in tennis and her statistics show that. She finished the 2018 season at fourth on the WTA Tour in aces with a total of 297, an average of almost five per match. She was also second in percentage of service points won that year among players with at least ten matches, behind only Serena Williams.

She is solid off both sides but a snappy forehand gives her sharply angled shots and her backhand slice is also one of her better strokes. Her doubles experience with Dellacqua and latterly CoCo Vandeweghe means Barty enjoys playing at the net and allows her to comfortably vary her game without being forced into playing to the strengths of her opponents.

In a tennis world where most of the players are strong and forceful from the back of the court, Barty comes with a pleasantly different health warning that she is not one of those.

Following up her first major win at Roland Garros with the title at Birmingham in the Nature Valley Classic, her first venture onto grass this season, she treaded a path rarely taken.

The only other female players to win the singles at Roland Garros and their next event on British grass have been Serena Williams, Steffi Graf, Martina Navratilova, Chris Evert and Court.

“We had a very vague plan to try and get back in obviously to the rhythm of it and to playing again,” she said. “But certainly not for it to happen this quickly. It is always a goal to try and be the best. It’s ultimately why we train, why we compete and play, but for it to happen in this way has been amazing.”

With that confluence of heritage it seems appropriate that she is also emulating a former indigenous player. Ranked at number one in the world makes Barty the second Australian woman to hold the top position after Goolagong Cawley.

“I think I’m nowhere near her status,” she said at Birmingham. “To be mentioned in the same sentence is incredible. Evonne, she’s an amazing human being and has set the tone for so many Australians and so many indigenous Australians around our country and around the world. And what she has done in her career was incredible and what she continues to do off the court for us as a sport is amazing.”