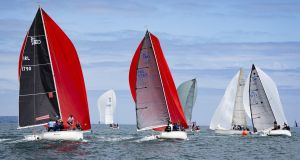 Frank Whelan’s Eleuthera from Greystones Sailing Club won the overall Sovereign’s Cup at the weekend following a clean sweep of six races in Division 0 of the four-day event.

The main trophy was awarded to the best boat competing under the international IRC rating system while the counterpart prize for the ECHO performance handicapping system, the Portcullis Trophy was lifted by John Gordon’s X-Rated from Mayo Sailing Club.

However, some of the hardest fought competition on the water – and off – was found in Division Two, the largest single fleet comprising 19 entries.

Nigel Biggs’ Checkmate XVIII from Manchester but sailing for the Royal Irish and Howth clubs had led the series going into the final day.

But two wins for Howth’s Michael Wright on Mata, the recent winner of the Division Two national title brought him into close contention with Biggs going into the final day. A win in the fifth race saw Mata pull ahead by a single point setting-up a tense final.

With just two contenders for the win, a match-race developed between the pair that Biggs convincingly won.

However, there was some consolation for Wright’s team as they lifted the Irish Half-ton Cup

Several boats later tried to have the final thrown out in a redress hearing ashore, alleging that the final race started outside the time permitted for the event. However, the application was rejected and the results stood.

In other results from the 95-boat event, Peter Bowring’s Phantom from the Royal St George YC won the Dragon National Championships after winning both races on the final day.