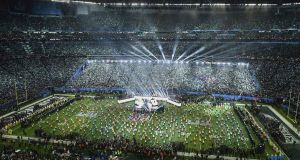 A US government document outlining plans for responding to a possible biological attack at Sunday’s Super Bowl in Minneapolis was left on a commercial jetliner, CNN reported on Monday, saying one of its employees found the paper in a seat pocket.

Multiple copies of the document, marked “for official use only” and “important for national security,” were found during a flight before the Super Bowl was played.

CNN said on its website it had delayed reporting about its discovery until after the game, at the request of federal officials. It did not say when the document turned up or if the flight in question was going to or coming from Minneapolis. CNN said it could not determine who left the documents on the airplane.

The errant document offered a critique of how officials performed during a simulated release of the infectious disease anthrax in Minneapolis on the day of the Super Bowl. Other sensitive material was also found, CNN said, without further description.

Officials conducted such exercises in July and November, as part of the Department of Homeland Security’s BioWatch program, according to CNN.

One of the biggest sporting events of the year, the National Football League’s championship Super Bowl is high on the list of potential targets for an attack, security experts have previously said.

The Department of Homeland Security often conducts exercises with state and local governments to guard against national security threats, Tyler Houlton, acting press secretary of the department, said in a statement in response to a Reuters inquiry about the CNN report.

“It is important that operators regularly exercise their capabilities against a wide range of scenarios in order to effectively counter the changing threat environment,” Houlton said.

Houlton declined to confirm whether any sensitive documents related to the Super Bowl were misplaced.

The game went off without a hitch, with the Philadelphia Eagles beating the New England Patriots, 41-33, at US Bank Stadium.

The security plan included bomb-sniffing dogs, a massive police presence, helicopters and a chain-link and concrete fence surrounding the stadium, officials said at a news conference ahead of the game on Wednesday.

In preparation for the game, authorities conducted more than 200 security assessments of critical infrastructure in the Minneapolis area, in addition to training for everything from active shooters to bombings.