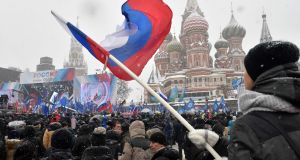 A man holds a national flag during the ‘Russia is in my heart!’ rally in support to Russian athletes on February 3rd in central Moscow. Photo: Vasily Maximov/Getty Images

The 15 Russian athletes and coaches who had their lifetime bans overturned by world sport’s highest tribunal will not be invited to this month’s Pyeongchang Winter Games, the International Olympic Committee has said.

The Court of Arbitration for Sport said last week that there was “insufficient evidence” of anti-doping violations against 28 Russian athletes, and while it confirmed 11 others had committed doping offences it cut their life bans to the upcoming Games in South Korea.

The IOC has banned Russia from Pyeongchang over “systematic manipulation” of the anti-doping system in Sochi but left the door open to athletes with no history of doping to compete as neutrals, officially known as “Olympic Athletes from Russia”.

After the Cas decision, Russia’s Olympic Committee requested that 13 active athletes and two who had become coaches be allowed to participate in the Games. However, the IOC said in a statement that its invitation review panel had “unanimously recommended that the IOC not extend an invitation” to the Games.

It noted that Cas had yet to provide a “full reasoning” for overturning the bans and that there was some evidence about the athletes that had not been available to the Oswald Commission, which conducted the investigation into Russian doping.

“Following the detailed analysis conducted by the panel, its members observed that there were additional elements and/or evidence, which could not be considered by the IOC Oswald Commission because it was not available to it, that raised suspicion about the integrity of these athletes,” it said.

IOC president Thomas Bach said on Sunday the Cas decision was “extremely disappointing and surprising” and had called for internal structural change at the court to allow it to “better manage the quality and the consistency of its jurisdiction”.

On Monday, Cas president John Coates said it had taken note of Bach’s concerns and they would be examined. “Athletes are entitled to have confidence in judicial processes at all levels, more particularly before the Cas,” said Coates.

“The reasoned decisions in high profile cases are critically important. The panels in the cases of the 39 Russian athletes are working on them, and we look forward to their publication as soon as possible. Cas will continue to evolve to ensure consistency and quality of jurisprudence.”