Tom Brady will be back for more Patriot games 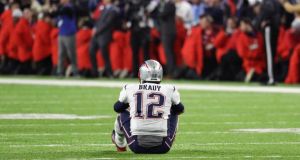 Tom Brady sits on the field after fumbling the football in the fourth quarter against the Philadelphia Eagles. Photograph: Rob Carr/Getty Images

Right to the bitter end, Tom Brady still believed it was possible. Even after the strip-sack, the field goal and the failed attempt at kick-return trickery that left the Patriots back at their own nine-yard line with 58 seconds to play and no timeouts remaining. Down eight points in the dying moments of a Super Bowl: hadn’t he been here before?

“We were poised, I thought we had another chance to get the ball,” said Brady afterwards. “We got it back around a minute ten, got it to midfield and took a shot - just came up short on the Hail Mary.”

It is precisely that defiance, that refusal to bend to anyone else’s narrative that has allowed him to become the most successful quarterback of all-time. We are often told that defence wins championships. This was a night when Brady ripped apart the NFL’s fourth-ranked D for a Super Bowl-record 505 passing yards.

Yet it was also not enough because Foles caught a touchdown on a fourth-down double-reverse trick play, where Brady dropped one that would have given New England a big first-down just a few moments earlier. If that one mistake did not define the game on its own, it was perhaps the single clearest example of what separated these teams: straightforward execution.

To listen to the Patriots players speak afterward was to hear this theme repeated a hundred different ways. Wide receiver Chris Hogan spoke about their failure to finish drives in the first-half. Defensive co-ordinator Matt Patricia lamented his unit’s difficulties getting off the field on third down.

He was right, of course. The Patriots were unfortunate to lose Brandin Cooks to a concussion, but before that the receiver had been involved in a play that highlighted the quality of the Eagles’ open-field tackling: his attempt to hurdle Rodney McLeod ending both painfully and short of the first-down marker. A contrasting image was provided by Philadelphia’s Nelson Agholor, slipping out of Johnson Bademosi’s grasp to pick up a big gain on third down.

Many will wonder whether New England might not have benefited from the presence on the field of Malcolm Butler - a man whose ability to produce a big play in a big moment has won them a Super Bowl before. The cornerback, whose end zone interception sealed victory over Seattle three years ago, had played 97.8 per cent of the Patriots’ defensive snaps this season. Here, he never made it onto the field.

Butler, who arrived one day later than his team-mates in Minneapolis after a reported illness, was seen crying during the anthem and told ESPN afterwards that “they gave up on me.”

Coaches refused to enter into specifics, but insisted that this was a football decision rather than a disciplinary one.

It is a story that will run on into the offseason, with Butler set to become a free agent. This has not been his finest season, but the notion that there could be no role at all for him on a day when the Patriots were struggling to make a stop seems absurd. That he was frustrated to play on a one-year tender this season, whilst fellow cornerback Stephon Gilmore got a five-year, $65 million contract, is well known, and he has conceded before now that for a time it did affect his play.

To lose him would hardly cripple these Patriots. No team turns over its roster as effectively as New England do under Bill Belichick, making stars out of journeymen or otherwise overlooked players. If things had gone just a little differently tonight, we might have finished the night lauding such unlikely heroes as Chris Hogan and Kyle Van Noy.

Yet there are players who will be harder to replace when the time comes. Rob Gronkowski is still only 28 but said he would “look over my future” before the start of next season. Meanwhile, Brady finished up on the losing side this time, but even at 40 years old he was the best quarterback in the NFL this season - deservedly winning the league’s MVP award before tearing up the record books even in defeat to the Eagles.

He was reluctant to answer questions about his future during his post-game interview, pointing out that barely 15 minutes had passed and that he would “like time to process this”. When pushed, he did upgrade an “I certainly hope so” to an: “I don’t see why I wouldn’t be back”. Before kick-off, he had told Westwood One that “you’re going to see me playing football next year.”

On the evidence of this performance, he still has plenty left in the tank. And it would have been bizarre indeed for the Patriots to trade away both Jimmy Garoppolo and Jacoby Brissett if they did not expect Brady to return.

But rumblings of discord between him and the head coach Bill Belichick have hung over the final part of this season, and you can be sure that we will hear plenty more on that subject now that there are no more games to focus on. It is not unreasonable to wonder if we will ever see them in a Super Bowl together again, yet equally we cannot call it implausible that they might yet share several more.

The speculation can wait, though, for at least a day or two. This Super Bowl Sunday did not belong to Tom Brady or the Patriots. Believe it or not, it is someone else’s turn to write the story for once. Guardian Service