Ashes: England find something to fight for

Ahead of the fifth Test, England are experimenting with line-up and new faces 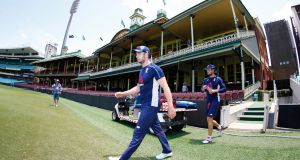 The rivalry between Melbourne and Sydney is no myth. Over a century ago it was so strong neither of these great cities could be the capital of Australia.

In 1901 the constitution specified Melbourne would serve as the capital on a temporary basis and the permanent one should be located in New South Wales but at least 100 miles from Sydney. Hence the creation of Canberra, whose Parliament House was opened in 1927 (pay attention at the back).

I think the rivalry still exists. This week we learned Melbourne spent more on its New Year’s Eve fireworks than Sydney – it appears it felt it necessary to compete. Naturally the rivalry extends beyond the cost of property or beer. It is evident in Aussie rules, football, basketball and netball.

It has always been there on the cricket field and in 2018 it transpires there are no Victorians in the Test team. Glenn Maxwell never quite made it; Peter Handscomb has been dropped while six of the Australia players turn out (occasionally) for New South Wales.

But now one senses the rivalry may go beyond cricketers to their cricket pitches. The MCG, slave to the cash cow that is Australian rules football, produced a shocker last week when its docile, drop-in pitch stubbornly failed to deteriorate, which is what good surfaces do. In Sydney the original square is still in place and for the fifth Test there is the feeling it may be worth bowlers of every hue turning up.

Yesterday there was plenty of grass on the strip. No doubt two or three millimetres will be trimmed off by tomorrow but there will still be some encouragement for the quicker bowlers at the start.

Even so Trevor Bayliss, who has been associated with this ground for more than three decades, is confident there will be scope for the spinners towards the end. In other words, we may have a proper cricket pitch on our hands rather than some antiseptic construction assembled in an outdoor laboratory and plonked into the middle of a multipurpose stadium. Quietly, the Sydneysiders may enjoy that contrast.

So might the bowlers, who may include Mitchell Starc for Australia. He missed the Melbourne Test with a bruised heel and hopes to be fit. As good a witness as any about Starc’s virtues is England’s Mark Stoneman, who has opened the batting against him in three Tests. Stoneman may not have wished to lionise Starc but his assessment was reminiscent of the “What have the Romans done for us?” scene in The Life of Brian.

Stoneman outlined what a difference Starc’s absence made in Melbourne and his observations were true enough even if he did not intend to deliver such a paean of praise. “Well, he’s bowling 10-15k (6-9mph) quicker [than Jackson Bird], from a different angle. He swings the new ball and he is good with reverse as well,” he said.

“It showed in Melbourne, where the pitch was on the slow side, and it made it harder for Steve Smith to rotate the attack. At the key moments he had to bowl Cummins and Hazlewood in tandem and then there was a release in pressure. No disrespect to Jackson, he’s got a fine record, but there is quite a difference between him and Starc.”

So Starc could play instead of Bird. Ashton Agar, the left-arm spinner from WA, has been added to the squad because of the expectation of the ball turning. My guess is he will play instead of Bird only if Australia are not convinced Starc is 100 per cent fit.

England are likely to introduce their third debutant of the series by picking Mason Crane, the Hampshire leg-spinner who played one game for NSW here 10 months ago. He is an effervescent, vastly inexperienced cricketer; expectations should not be too high but his presence will only add to the excitement. Crane would replace either Tom Curran or Moeen Ali.

Six weeks ago it was unthinkable Moeen would be omitted but after a reasonable start in Brisbane his confidence with bat and ball has been drained. There should be many more Tests for Moeen but this may not include Sydney.

For all the England players there remains plenty to play for, not least because the squad for the two Tests in New Zealand starting at the end of March will be named soon after the game. Unlike four years ago there still appears to be an appetite for the fray, which is exemplified by Stoneman. In part this is because Sydney is his second home, having met his wife here while playing six seasons of grade cricket in the city.

He is not a man given to hyperbole; a no-nonsense Geordie. Yet it becomes apparent he has relished the last two months. “The first Test at the Gabba was up there in terms of hairs [standing up] on the back of the neck, going through the anthems. The rest of it has been great fun. I don’t think you can have as much fun as playing in the Ashes. There’s that little bit extra to it. It’s been a great tour.”

Stoneman is not alone here. The saving grace – in contrast to the tours 2006/07 and 2013/14 – is that even though the series has long been lost, England are still up for the contest. They battled away in Melbourne and they seem eager to do so in the final Test, where they hope Crane can give them a lift … Yes, it’s been a long tour.