Victoria Azarenka latest star to pull out of Australian Open 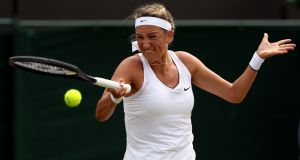 Two-time champion and former world No 1 Victoria Azarenka has become the latest star to pull out of the Australian Open.

The 28-year-old won in 2012 and 2013 but had been in extreme doubt after pulling out of last week’s Auckland Classic amid an ongoing custody battle with her former partner over their son Leo.

The US-based Belarusian hasn’t played since Wimbledon because she can’t leave California with her son until the custody dispute is resolved.

Azarenka, currently ranked 210 in the world, had been given a wild card entry into the tournament, which begins on January 15th.

Tournament director Craig Tiley said: “It’s unfortunate that Vika is unable to travel to Australia this year. It is her favourite tournament and she’s looking forward to returning to Melbourne next year.”

Last week, reigning ladies singles champion Serena Williams said she would not play in Melbourne. The former world number one said she was “super close” to being tournament-ready but reluctantly withdrew from the competition.

It was due to be her first Grand Slam since giving birth to daughter Alexis Olympia in September. Andy Murray, Kei Nishikori and Svetlana Kuznetsova have also withdrawn.

Meanwhile, US Open champion Sloane Stephens’ preparations for the Australian Open hit a speed bump on Monday when she was bundled out of the Sydney International first round by Italy’s Camila Giorgi.

Stephens made 35 unforced errors as she lost 6-3 6-0 to the 26-year-old in just over an hour. World number 13 Stephens has not won a match since beating Madison Keys in the final at Flushing Meadows in September.