Sonia O’Sullivan: Following in Sophie’s footsteps to the medal podium 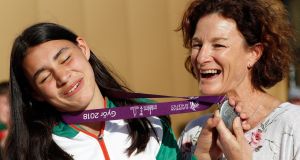 Just over two weeks ago we were at the Victorian State cross-country championships in Melbourne, my daughter Sophie running with her Wesley College team mates. The race was 4km, over rough undulating terrain, and Sophie held out to win, qualifying for the national championships in Queensland next month, her school also picking up the team gold medal.

Two days later Sophie was on the plane to Ireland to meet up with the Irish team ahead of the European Youth Championships in Gyor, Hungary.

It was the start of a big adventure that ended with her winning the silver medal in the 800m on Saturday night, not expected or perfectly planned but always a possibility. For some people it felt like Sophie was following in my footsteps, when most of time it felt more like I was following in hers.

I’d dropped her off at Melbourne airport on the Monday evening. She had been to school that morning, and later squeezed in a drills and circuit session with her friends. It was the first time Sophie would travel from Australia to Ireland alone. I would follow a few days later after organising a few things for my oldest daughter Ciara and our dog Snowy. before escaping the Melbourne winter for the warmer European summer. Sophie was met in Dublin airport on Tuesday afternoon, and stayed with friends in Malahide.

The day before she left we sat down with her coach, Tim O’Shaughnessy, in a cafe in the Dandenongs mountains, just outside Melbourne, to write out a plan for each day. It felt just like when my coach Alan Storey used to pull out a pen and paper and scratch out a plan for me when I would be heading off on a trip.

The next day Sophie went to a team day at Sports Campus Ireland, a chance to meet up with her teammates ahead of travelling to Gyor. They collected their new gear, had a few information sessions and went for an easy 30-minute run.

I arrived in Ireland on the Friday afternoon: same flight, just a few days later. The Irish under-20 championships were on in Tullamore the next day, a good opportunity for Sophie to blow out the cobwebs over 800m. It was warm and windy, and after a slow opening lap of 72 seconds, the 10 second change in pace for the final lap left Sophie in second place as Jo Keane raced to the line first. Sophie was obviously lacking some track racing, but this would help her next time out.

We had two days in Cobh, a chance to unpack and repack and just do a few normal everyday activities, before heading off again. On the Monday we met up with Glenilen Farm, friends and sponsors of the Cork City Sports junior 1,500m. This photocall at the CIT athletics track fit in nicely as in the warm midday sun Sophie did her last track session: 1,600m, 3 x 800m, then a change into spikes for a fast 300m in 43 seconds. And she made it look easy.

Once in Gyor, Sophie shared a room with long jumper Sophie Meredith from Limerick. This was the one girl on the team that Sophie already had a connection with as back in 2012 Sophie won a gold medal in the under-12 All-Ireland high jump and Sophie Meredith finished second. I still have a picture of that day, and it’s quite surreal looking back to see how much the girls have grown up, and see them reunited on the Irish youth team six years later.

Again, I followed her footsteps out. It was a new experience for me attending a European Championships and not physically running, but mentally being there every step of the way. It’s not easy to stand back and say nothing. You want to make sure everything is okay, but you don’t want to be fussing around and making a big deal of things.

I signed up for a media accreditation, figuring this would give me one of the best seats in the house with a clear view of the finish line. For the first time I felt like I was truly on the other side of the fence.

Everything was like a mini version of the senior European Championships, and the perfect stepping stone for young athletes; the village-style accommodation, with everyone in similar conditions; the dining hall, the crowded buses, and the long hours waiting around each day before the evening competition.

If you’re alone in this situation it can be a little tiresome. For these young athletes in this team environment it was energising. It was also refreshing to see the Irish athletes surround each other with support in the stands and after every race when they went en masse to welcome back each athlete as they finished their events.

They all returned from the arena through the media zone at the finish line after they collected their tracksuits, and each athlete got the same support no matter how their event had gone.

It felt like the competition was just a small part of the experience. This was the test that everyone prepared for and everyone wanted to do their best, knowing this was just one more stepping stone, a learning experience for everyone.

But it’s not just the training, but the people you surround yourself with. I’ve seen this so many times – the more positive people that you can have in your corner the more likely you will reach the levels you are capable of.

Sarah Healy won two gold medals in the 1,500m and 3,000m, and Rhasidat Adeleke won the 200m. Like Sophie, they were highly ranked before the championships, but what’s on paper doesn’t count once the races begin.

You have to be able to race and compete, and that is exactly what these girls did. So much so that the Irish girls were ranked number one in Europe on the medal table.

When any young athlete lines up on the track, as the camera pans across the field stopping for the introductions, this is not just their face but the face of many people who get them to the start ready to run, jump or throw.

Behind every successful athlete is a dedicated team that works quietly in the background, letting the athletes decide the finishing touches, and that’s what happened at these championships.

In that sense there were no real surprises. Every athlete that won a medal had the ability to do this and they made it happen. This is how Irish athletes need to approach a championship; knowing what they are capable of, rising to the challenge, fighting to the end and never giving up.