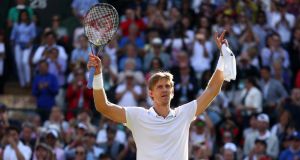 Normally it’s the opponents of Roger Federer who suffer from vertigo on Wimbledon grass. But from two sets up and match point in the third Federer fell as far as he ever has in his quarter-final match against South Africa’s Kevin Anderson.

The South African saved match point at 5-4 down on his serve after a long Federer forehand, a shot that would come back to haunt the champion throughout the four hours 14 minute epic, fell out.

It was a remarkable turnaround by Anderson, whose best performance at Wimbledon was this year’s quarterfinal. Now he has gone one better.

Federer flew through the first set making it look like a master class. After 26 minutes he was onto the second, winning that in a tiebreak.

But Anderson hung tough and remained composed. On occasion he rode his luck as the Fedrerer forehand, usually a rapier, became a liability. Chasing his 21st Grand Slam title, the master will be left to wonder how it was he allowed the 32-year-old back from the precipice and then blinked first deep into the fifth set.

The controversialists will point fingers towards the All England club committee for moving Federer from Centre Court for the first time since 2015.

Novac Djokovic told Serbian media that he had lodged a complaint with Wimbledon organisers about his lack of matches on Centre. They listened.

But Federer wasn’t looking for excuses. “Just today when I needed it I couldn’t get it up,” he said. “I’m up two sets to one. It’s all good. I wasn’t thinking at that time of losing.

“The one-two punch wasn’t really working today. Maybe it was the breeze, I don’t know. He was consistent. He was solid. He got what he needed when he wanted. All credit to him.”

As much about Federer’s discomfort against the big serving Anderson, who hit 28 aces, was how he also came up with pressure shots that were hitting the lines. Afterwards Anderson said he had to keep telling himself to believe. He knew he had earned another chance after the third set and he grinded out every point.

“I’m not quite sure what to say right now,” he said. “I was able to scrape through that fourth set and fifth set. I think I did a great job. I just kept telling myself I had to keep believing.

“You really need that mindset taking the court against Roger. As the match went on I just kept saying this is going to be my day.”

Federer could not, or did not want to explain how the match was lost. Players are reluctant to point to their flaws but too many forehands hit the net or went long. Too many chances were left on the court.

Anderson used his serve wisely, stealing the third set and winning the fifth 7-5 with momentum swinging with him and the luxury of having a one set shoot out against Federer for a first ever semi-final.

At the end as the fifth set games climbed into double figures at 11-11, Federer double faulted for the only time in the match and followed that with a forehand into the net for 11-12, allowing Anderson to serve out for the match. Earning two match points, a final Anderson delivery that Federer could only hit high and wide at full stretch brought his run this year to an unlikely end. “To be honest. I had my chances and blew them, so . . . that’s my problem really,” said Federer. “I don’t want to sit here and explain my loss. That’s the worst feeling you can have as a tennis player.

“I didn’t feel mental fatigue,” he added. “Now I feel horribly fatigued and just awful. It’s just terrible. But that’s how it goes, you know. Credit to him.”

Djokovic became a serious Wimbledon title contender on Centre Court as he made his first semi-final since 2015 with a 6-3 3-6 6-2 6-2 win over Kei Nishikori.

It was a performance of resolve from the former number one and reminiscent of the player who held all four Grand Slam titles two years ago.

Late in the evening Rafael Nadal emerged victorious from another enthralling five-setter when he edged out Argentina’s Juan-Martin del Potro 7-5 6-7 4-6 6-4 6-4. That sets up a mouth-watering semi-final against Djokovic with Anderson set to play John Isner who beat Milos Raonic in four sets.