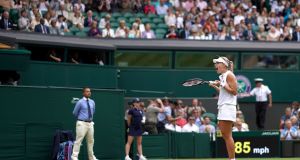 Angelique Kerber celebrates her win against Daria Kasatkina on day eight of the Wimbledon Championships at the All England Lawn Tennis and Croquet Club, Wimbledon. Photo: John Walton/PA Wire

Daria Kasatkina may have come and played and lost at Wimbledon. But like the 100 RAF aircraft that passed over Buckingham Palace on Tuesday to mark the air force centenary, so the 21-year-old Russian left behind a vapour trail of energy and verve on women’s quarter-finals day.

She may have lost focus, hit the wrong shots at the wrong time, allowed her nerve fail her on serve against the 2016 Wimbledon finalist Angelique Kerber.

But Kasatkina, ranked 14, will return a little more calibrated and controlled and she will threaten the top players more seriously. Even the highest remaining seed Kerber was rattled in her far from straight forward 6-3, 7-5 win.

Kasatkina has the rare quality of being able to expose her character on court and so with her ropey discipline, a hitch kick backhand, a forehand that cuts wide and deep, an absurdly accurate backhand drop shot and big heart, she leaves knowing it could have been so much more than a run to the quarter-final.

It took the classic counter puncher Kerber seven match points and all of her experience in the final game of the second set to put the youngster away. In all there were 10 breaks of serve, including five in a row late in the final set.

Where Kerber was consistent and accurate, her opponent gave away double faults and service breaks only to win them back and then hand them back again. The narrative was almost impossible to follow.

When at last the twice Grand Slam champion in the US and Australia forced the match, it was with a sigh of relief and Centre Court remembering at least as much of their first glimpse of the gifted Kasatkina in a quarterfinal than the advancing German player.

“I am a little bit crazy,” said Kasatkina during the week. We believe her. She is like a “wild horse,” said her coach. We believe him.

“My head was just empty,” added the 21-year-old. “I didn’t feel any pressure, any fear. I was just going on the next point and playing, playing, playing. I mean, almost every match point, it was something like crazy things I was doing, yeah. That’s it. I think this is the key to win the big matches: just don’t put anything in your head, to play with an empty head.”

Playing tidy lights out tennis the former Italian gymnast with the porcelain features and waspish style threatened to roll over the biggest name in the game on her favourite strip of grass.

The seven times Wimbledon champion Serena Williams went a set down to Camila Georgi after a breathless first set before clamouring back into the match to win 3-6, 6-3, 6-4.

It was the first set the American has dropped in this year’s competition, although it was pointed out, to her surprise, that she has dropped only 14 points in 14 service games so far.

Showing little emotion on court Georgi, in her first Grand Slam quarterfinal, showed no sign of wilting before the towering Williams and served out the first set to lead 6-3.

Quickly making her shots count the 36-year-old mother shot to 3-1 in the second set and never looked back, taking just over 100 minutes for the match. Losing never crossed her mind.

“It’s weird,” said Williams. “Sometimes I feel, man, I’m in trouble. Sometimes I feel I can fight. For whatever reason, today I was so calm. Even when I was down the first set, I thought, well she’s playing great. I’m doing a lot of the right things. It is what it is.”

A feature of the week is how Williams has warmed to motherhood and post tennis musing.

“I’ve always embraced being a role model,” she added with no hint of immodesty. “I think for me I just fell into that perfectly. Now that I’m a mom, I just want to even be more of that role model for my daughter, for people out there that just want to be inspired.”