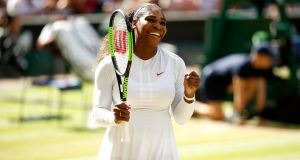 There has been a hard won changing of attitude towards Serena Williams over the 20 years she has been playing at Wimbledon.

At first the braided hair and the proportions of her character, her deportment, mannerisms and general mien were so culturally different, fans saw her as a great blast of colour and curiosity as much as a tennis world beater.

Their father Richard grandly told anyone who would listen that the unknown younger sister Serena would be better than Venus, whose first Grand Slam would come at Wimbledon in 2000. It sounded like a crass American boast.

But warmth has rarely come into Williams relationship with the fans. Respect, admiration and appreciation of how she has dominated tennis this century have never been in doubt. But Williams has never been pulled into the bosom of the Centre Court crowd.

Straightforward Roger with his impeccable manner and regal air dovetails more sweetly with English sensibilities. They understand him.

Williams’ mild eccentricities, her choreographed twirl and wave and sometime begrudging tone when she loses thwarts real closeness. The Hollywood grandeur. They don’t really get her.

This week she spoke kindly of musician Drake and boxer Mike Tyson. Drake was at Wimbledon on Tuesday, Tyson in Paris for the French Open last month.

“It’s so cool, especially artists like that, like Mike and Drake who are so successful, to come out,” she said. “It feels like tennis is becoming part of pop culture. That’s what I love about it.”

For a crusading woman on several fronts including equal prize money with men, it was a forgiving opinion for a jailed rapist like Tyson. Others would say inconsistent.

But this week there has been a softening towards the model, actress, fashion designer and tennis player.

When Williams was down a set against Italy’s Camila Giorgi in the last round, the crowd rallied. They cheered her big serves. They wanted her to stay.

With all her talk of motherhood and a sense that at 36-years-old this cannot continue forever, the crowd have been urging her along.

They may not understand Williams but do understand she is the only real star left in the show. The other semi-finalists Jelena Ostapenko, Angeline Kerber and Goerges don’t possess her big cheese wattage.

Williams is the celebrity package, the high voltage personality that illuminates Wimbledon like no other player. She animates the draw, allows it to become something larger and more globally profound. Being American and a superstar freights Wimbledon with appeal and gloss that takes it across boundaries, maybe even into pop culture.

Size matters. It is fundamentally more difficult for a Latvian like Ostapenko, who could walk around the All England Club unrecognised, to inflate to Williams’ size and expand the sport.

Now the tennis mom - a phrase Williams likes - is one match away from delivering and she is doing it after a year out as her ranking sank. It has, this week, moved up to 51 in the world.

There is a feeling she will keep going past Goerges for a meeting on Saturday with Kerber or Ostapenko. Wimbledon will know what winner they want.