Sonia O’Sullivan: We need a new category in women’s athletics

Ruling on hyperandrogeism may change things for athletes like Caster Semenya 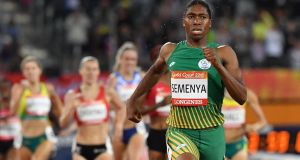 South Africa’s Caster Semenya coasts to victory in the 1,500m final at the Commonwealth Games at the Carrara Stadium on the Gold Coast, Australia. Photograph: AFP/Getty Images

I know some people find it hard to get excited about the Commonwealth Games, although try telling that to the Australians. Over six days in the swimming pool they produced a proper gold rush – 28 gold medals in all, and 73 of the total 150 medals won in the pool. Few other countries could even make a splash.

You start to wonder how it all could be so easy, then you realise there are so many events in swimming, the same swimmers often returning over and over again. At one stage I saw an Australian swimmer on the podium being presented with her medal, and a few minutes later she was lining up for the next event.

If it wasn’t for the fast times, even world records, you would wonder about the level of competition at the Commonwealth Games. Even with 71 nations or territories represented, if felt like a home championships for the Australians. The crowds and venues on the beautiful Gold Coast playing a part too.

That all changed when the track and field events began. Compared to the World championships and the Olympics, where over 200 countries are represented, the Commonwealth Games are just a small pocket of countries competing for glory. But does it really matter as long as the race is competitive and engages the audience?

The women’s 10,000 metres provided plenty of drama: no breakaways, the lead constantly changing, and eight athletes still fighting out for the medals over the final circuit.

That gold medal in the end went to the Ugandan athlete Stella Chesang, in 31:45.30. There really are no soft gold medals on the track and that is evident here across a number of events. The women’s 1,500m final was one of the most eagerly awaited races, usually one of the more unpredictable too. Only this time it had very little unpredictability over the winner, and it was up to the rest of the field to try to change the script.

The now indomitable Caster Semenya of South Africa, who normally concentrates on the 800m, decided to try her hand over 1,500m, she’s also racing again over 800m. Having posted a world leading 4:02.50 just a month ago, and cruising through the qualifying round, Semenya was clearly the favourite. Even IAAF president Seb Coe, while commentating on Australian television, remarked this was not a race we were ever going to enter a sweepstake.

Much has been written already about Semenya and hyperandrogenism, a condition that means a woman has increased male sex hormones in her body, including testosterone, and as a result can have a considerable athletic advantage over her female competitors. And especially, it seems, over 800m.

There is due to be a ruling on this condition announced by the IAAF later this year that may change things for athletes diagnosed with hyperandrogeism. I think Semenya has at this stage established herself as such a strong personality on the circuit that it would be very difficult to tell her she can no longer run or compete. This has dragged on for some nine years now, there needs to be a more humane way of dealing with this so the result is fair to all competitors in women’s athletic competitions.

It may be time to award more than three medals, to allow athletes with hyperandrogenism to compete in women’s races. After all athletes cross the line then the medals should be awarded by category, if the need be.

As an example, in the 1,500m Semenya, would receive the gold medal in her category, then another gold would go to Beatrice Chepkoech from Kenya (originally second), silver to Melissa Courtney from Wales, and bronze to Linden Hall to Australia.

Semenya is not the only female athlete with hyperandrogenism, so it makes more sense to categorise the medals in this sensitive way – particularly when this is a medical condition, and so can be measured and athletes know which category that they are competing in.

I don’t think it would change the quality of a race: if anything having Semenya in the Commonwealth Games final made for a much greater race. Still, I don’t think Semenya was fully extended in the final, and can probably run a lot faster over 1,500m.

I know when athletes have hope then they’ll continue to work harder, try to better themselves and also achieve success. There are many measures of success but there is no greater acknowledgement than winning a championship medal.

This hope has been dwindling in recent years for women over 800m, which is why whatever the IAAF have decided on how to deal with this ambiguous situation, it should be supported: it should give more hope to women athletes while also looking to facilitate those with hyperandrogenism.

If they can add a few events in the swimming pool, to give the same athletes a chance to win even more medals, then surely it can’t be that difficult to add an extra category to women’s races, at least where hyperandrogenist athletes are competing in the finals.

There was also Irish interest in that women’s 1500m, when Ciara Mageean lined up in the final. Even though Mageean was well outside the medals in 13th position, she was always in a good position throughout the race, looked like she was going to regain some form and deliver what she has promised so often. Then the final lap by Semenya was covered in 60 seconds, the final 200m 28 seconds.

Mageean covered her final lap in 66 seconds: she was never going to win the race but she had every chance to be more competitive in the closing stages, and just seemed to lack that extra racing gear when she needed it. Or maybe some extra hope.