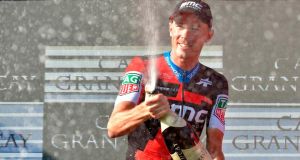 Yates (Mitchelton-Scott) finished 13th, one minute and 28 seconds behind Dennis, but crucially ahead of all bar two of his rivals for the general classification.

Dutchman Steven Kruijswijk (LottoNL-Jumbo) was fourth on the stage, 37 secnds ahead of Yates, and Spain’s Enric Mas (QuickStep-Floors) was sixth, 25 seconds ahead of the British rider.

Dennis is not in overall contention and was targeting the stage as preparation for the Road World Championships time trial later this month.

Yates had, on Monday’s rest day, attempted to downplay his chances of holding the red jersey all the way to Madrid.

But the 26-year-old Bury rider, not renowned for his talent against the clock, has a strong cushion with four days of racing remaining ahead of Sunday’s processional stage in the Spanish capital.

Yates now leads from Valverde by 33 seconds, with Kruijswijk, who had begun the day 1:29 behind, now third, 52 seconds adrift. Quintana dropped to fourth, 1:15 behind.

Yates can expect his advantage to come under attack in Wednesday’s hilly 17th stage, the 157km route from Getxo to Balcon de Bizkaia in the Basque Country.