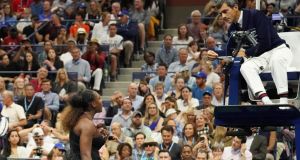 Top tennis umpires are considering forming a union because they believe Carlos Ramos was “hung out to dry” by the authorities during and after the US Open women’s final despite upholding the rules in sanctioning Serena Williams.

Many officials were also left angry with the fact that the International Tennis Federation (ITF) took nearly 48 hours to defend Ramos, on Monday afternoon, by which time the Women’s Tennis Association (WTA) and United States Tennis Association (USTA) had supported Williams’s claims of sexism after she was given a game penalty for her behaviour during her defeat by Naomi Osaka.

Umpires are not allowed to speak out publicly under the terms of their contracts, and are employed by grand slams and men’s and women’s tours, which means many are reluctant to say anything for fear of losing their jobs. However one senior figure told the Guardian that privately there was widespread concern about how the USTA and WTA had rushed to support Williams – which had led to vitriol and abuse on social media for Ramos.

In the absence of any official support for Ramos until Monday, it was left to two former senior umpires, Mike Morrissey and Richard Ings, to publicly defend the Portuguese official. “I have had lots of messages saying this is a joke,” said one source. “There is a lot of anger out there.”

That has led to several umpires privately pushing for an officials’ union, an idea that has floated around on and off for years, as a matter of urgency.

One source, who has been privy to some of the discussions, said: “Umpires don’t have any independent means of representation and are employed by the governing bodies. If talking to the media is not allowed, and governing bodies are speaking out against them, what are umpires supposed to do?”

On Monday the ITF, for whom Ramos is a contracted “gold badge” umpire, belatedly issued a statement to support his handling of the final. It confirmed that, under the grand slam rule book, all three violations he issued against Williams – following the three-step penalty process of warning-point-game – were correct.

“Carlos Ramos is one of the most experienced and respected umpires in tennis,” the statement said. “Mr Ramos’s decisions were in accordance with the relevant rules and were reaffirmed by the US Open’s decision to fine Ms Williams for the three offences.” - Guardian service