Shaw insists Ireland must be wary of ever-improving India 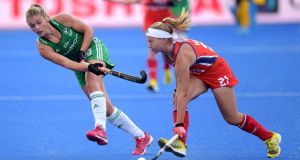 Graham Shaw says his Ireland side need to be wary of an ever-improving India side in their second World Cup tie as they stand on the brink of a famous first berth in the knock-out stages of a World Cup in London.

A win would see the Green Army guaranteed to advance in one of the top three spots with the possibility of winning the group and a direct ticket to the quarter-finals very much alive.

Like Saturday’s 3-1 defeat of the US, Ireland go into the tie as underdogs based on ranking positions, but they have a strong record against the Asian side.

Most notably, they were the side Ireland beat in Johannesburg in World League Three to pretty much assure their place in London. It was a tie fraught with emotions, one which Ireland dominated for long periods but they only scraped home with two goals in the last 10 minutes for a 2-1 success.

Indeed, were it not for sub goalkeeper Grace O’Flanagan’s heroics, they probably would not be on this stage. Trailing 1-0, she emerged from the bench to save a penalty stroke with her very first touch of that tournament when Ayeisha McFerran was sinbinned for a foul on Navjot Kaur.

O’Flanagan denied Rani Rampal’s stroke and the mood lifted immeasurably after that, as Ireland showed the character to pull the result out of the fire.

In addition, Ireland beat India twice at the 2016 Hawkes Bay Cup with their last defeat only coming back in 2014. As such, pre-tournament, this was the tie viewed by outside eyes as the must-win tie if the Green Army were to emerge from Pool B.

Now, the complexion has very much changed with the value of a victory very different.

For coach Shaw, he anticipates a new challenge compared to the zonal line-up the US provided with India known for a long-ball game, using pace in attack and congestion around their own defensive lines. They showed how difficult they can make things for opponents in their 1-1 draw against Olympic gold medallists England, only succumbing to a late equaliser.

“India pose a very different challenge,” Shaw said. “I rate them very highly and they have greatly improved since we played them last year in Johannesburg. We prepared in the same manner as we did for the USA; every day, we do little bits of video to prepare for aspects of their game and will then try put it all together on the day.”

The other aspect that he looks to continue to foster in the side is the relaxed vibe, the refrain of enjoying the moment continuing beyond the feel-good factor of Saturday.

The players got time to mingle with supporters at Fan Central on Sunday at Lee Valley, trying their hand at television presenting for the BBC and showing off some of their skills on stage.

It is a far cry from the tetchy and tired outlook that accompanied last August’s draining European campaign in August.

And midfielder Chloe Watkins – who has been part of the squad since before the 2012 Olympic qualifiers – said earlier this week it has been one of the most relaxed, happy atmospheres despite the high stakes.

“There’s a good buzz and everyone seems to be enjoying themselves. We were well prepared going into the US game so that showed in our performance. We were calm and confident which is down to that and hopefully we can do the same this time out against India because it does help.”

Temperatures could hit 30 degrees at the venue, but Watkins said it should not be a major issue having trained on Tuesday at the same time as Thursday’s 2pm tip off.

“It’s always a few degrees higher inside the stadium; we noticed that the other night. It was so important for us to get training in [at the same time of day] to see if we need to bring in any new protocols or increase fluid intake.

“We know it’s going to be hot and it is quite humid but we have played in Malaysia, Johannesburg and Valencia in the middle of the summer, so we have strategies to combat that.”