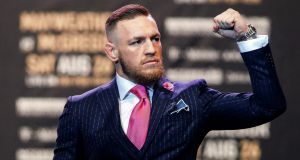 Conor McGregor has been warned he faces being stripped of his UFC lightweight title if he remains out of the octagon until September.

The Dubliner is widely regarded as the UFC’s biggest draw but has not fought since defeating Eddie Alvarez in November 2016 to add the 155lb crown to his featherweight strap, which he no longer holds.

McGregor decided to dip his toe into the boxing world last year for a lucrative showdown with former pound-for-pound king Floyd Mayweather and has intimated to UFC president Dana White that he intends a comeback in the autumn.

But White believes McGregor’s continued inactivity is unfair to his division rivals and added talks are under way for interim champion Tony Ferguson to take on undefeated Russian Khabib Nurmagomedov in a bout for the undisputed lightweight title.

According to White, McGregor could then fight the winner.

White told Fox Sports: “Conor has said he’s thinking about coming back in September. If he comes back in September that’s almost two years, that can’t happen, it’s not fair to everybody else.

“I love Conor, I respect Conor, I love everything he’s done for this company, but the belt would have to move on.

“You do Khabib versus Tony, we’re working on that fight now. If and when Conor comes back, he would get the first crack at the title.”