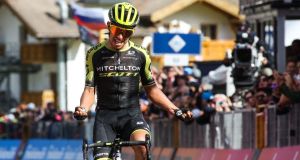 Colombian competitor Esteban Chaves displayed a return to form after a tough year on Friday, expressing relief when he took stage 19 of the Giro d’Italia.

The Mitchelton-Scott rider started last year’s Giro d’Italia as one of the race favourites but after winning stage six, his race hopes collapsed when he lost chunks of time. He was subsequently diagnosed with Epstein-Barr Virus and was sidelined from competition until February of this year.

“This is pure happiness,” he said at the summit finish at San Martino di Castrozza, Trentino. “It takes a heavy weight off my back. It’s a relief to be a winner again. It shows I can do it. Because the last climb wasn’t very steep, I had to attack many, many times. A big thank you to everyone who supported me when I had a hard time.”

Chaves was part of the day’s 11-man breakaway and finally broke the elastic with just under three kilometres to go. The overall contenders weren’t concerned about the breakaway and allowed them gain time before duking things out between themselves on the final climb. Another Colombian, Miguel Angel Lopez (Astana) was the only one able to make a difference and picked up 44 seconds over race leader Richard Carapaz (Movistar) plus the other general classification riders.

The Giro continues on Saturday with the final mountain stage. The 194 kilometre stage to Croce D’Aune-Monte Avena will see Nibali and others vying to narrow their deficit before Sunday’s concluding time trial but, unless Carapaz weakens dramatically, his first Grand Tour victory is all but certain. As for Dunbar, his debut in a three week event illustrates his talent and the potential for major future success.