Fourteen Irish sailors among the 1,212 boats in action at Aarhus, Denmark this weekend 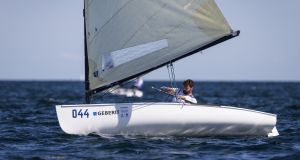 Although racing in the Hempel Sailing World Championships has now started, the sheer scale of the task facing the 14 Irish sailors seeking qualification for the Tokyo Olympics will only be fully revealed over the weekend when all 1,212 boats are in action at Aarhus, Denmark.

Occurring just once in every Olympic quadrennial, all ten Olympic disciplines gather to stage a joint world championship just two years before the games themselves.

By the second weekend in August, not only will this year’s world champions be decided but 40 per cent of nation places for Tokyo will also be awarded.

After this opportunity, another tranche of places will be decided in 2019 at various individual world championships and the balance awarded early in 2020.

So, what are the realistic prospects for Irish qualification in Aarhus over the coming week?

An indicator of the task is the opening race for the Finn single-hander on Thursday when Fionn Lyden from Baltimore Sailing Club and Oisín McClelland from Donaghadee Sailing Club were amongst 90 competitors that spent up to eight hours afloat just for one race.

Light winds saw a sea breeze that struggled to become established allow just one 50-minute race that made the long day afloat worthwhile.

Split into two 45-boat fleets, both Irish sailors ended up in the Yellow group that sailed first and McClelland opened his series with a 16th place – almost top third – and not bad for starters.

Lyden got caught in the second row of starters and it took the West Cork sailor the two full laps of the course to recover ground which he did impressively to regain a top half result at 21st place.

Even though the fleet is split in two and in spite of their results, the challenge for both McClelland and Lyden is that the Tokyo qualification standard is top eight by nation so the series ahead will require a move towards top ten results for both to stand a chance against the longer-established heavy-hitters in the class.

Meanwhile, four Irish sailors start are racing in Laser single-handed events on Friday as Rio 2016 veteran Finn Lynch from the National YC contends with Liam Glynn from Ballyholme YC who is fresh from winning bronze at the U-21 Worlds in Poland last month.

The full Irish line-up will be in action over the weekend when the four 49er skiff crews begin their series.