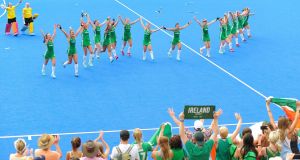 Ireland players celebrate following the victory over India in the Pool B group game of the World Cup at Lee Valley Centre in London, England. Photograph: Harriet Lander/Getty Images

Manager Arlene Boyles has perhaps best summed up the shift in expectation for the Irish women’s side as they gear up for tonight’s maiden World Cup quarter-final in London against India.

Pre-tournament, expectations were that they could emerge from the group, maybe take their chances in a crossover game and perhaps sneak into a quarter-final.

Victories over the US and India, though, and suddenly Ireland were guaranteed to bypass those crossovers with a game to spare and all bets were off.

And then things got even better. By quirk of a curious tournament format, Ireland face into the biggest match in their World Cup history with at the very least an even chance of success as they have avoided numerous sharks.

Coach Graham Shaw is among those who has raised an eyebrow at the way group rivals could potentially meet just a couple of days later in the quarter-finals once the crossover ties are ironed out.

He described it as “strange and unusual” but stopped short of saying he was too displeased with the outcome. Had the alignment of crossover games gone a different way, the alternative could have been a game against either two-time winners Argentina or 2006 bronze medal winners Spain.

In that sense, it shows how kind the draw has been as Ireland meet one of the only two other sides remaining from outside the top eight in the world.

“I am guessing supporters and everyone back home would prefer a bit of variety! Playing the same opposition is strange and unusual for everyone involved but we just have to prepare for India and try and put in a performance that we know can get us a result and put us through.”

That it is a repeat of the group match is the ultimate test of Shaw and his staff’s coaching nous – as it is for India boss Sjoerd Marijne – as they seek to learning and apply the lessons learned from the first meeting.

India found their mojo on Tuesday night when they proved far too strong for Italy with teenager Lalremsiani emerging as a real star in attack. But their attacking penalty corner moves – an area highlighted as a real threat to their rivals pre-tournament – have proved disappointing so far.

Runners Anna O’Flanagan, Yvonne O’Byrne and Nikki Evans had their lines worked out perfectly for the first tie but there is now a wealth of information on their patterns and so how each side adapt will be critical.

India have taken heart from their statistical dominance of the group game, believing Ireland cannot produce such a defensively sound display again. This is certainly no gimme for Ireland.

For both countries, this in uncharted territory. India’s best finish came in 1974 but, like Ireland, they have not been frequent visitors to the main event since then. Indeed, as much as it is Ireland’s biggest game, the same is true for their opponents.

How both sides handle the game in a potentially strange atmosphere remains to be seen. With English fans getting access to buy tickets before the visiting supporters, it is likely the 10,600 in attendance will be mainly neutral, waiting for their main event of the double-header.

Irish fans have been scrambling to adapt to the change in times but Shaw said he always had a draft schedule in place to cope with such changes. A much wider audience will be available to view the game with RTÉ picking up the rights from BT Sport to show the game live.

Shaw is hopeful his players will continue to approach the game in the same relaxed but determinedly focused manner of the group stages, savouring the moment.

But the players are acutely aware that the magnitude of this competition surpasses anything they have experienced before.

“It’s something that all of us have only ever dreamed of so it’s really exciting but also we are really focused and ready for it come Thursday evening,” said Katie Mullan.