The good, the bad and the pain of Dan Martin’s Tour

‘Everybody has a bad day at the Tour. It just depends on whose bad day is the least bad’ 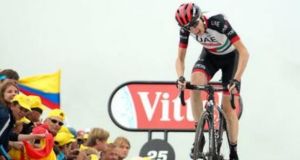 He’s been caught in the crosswinds and muddied on the cobbles. He’s punctured and crashed, and was heard screaming in the shower of his team bus.

He won one stage and just lost another, and was last seen on the 200km from Lourdes into Laruns over seven categorised climbs in the Pyrenees, finishing with all the riders who will stand on or be close to the winner’s podium.

After nearly three weeks he’s got two more days in the saddle, and he must be one of the hardiest men in Irish sport.

I met Dan Martin a few weeks before this year’s Tour de France, and he told me how much he was looking forward to it. Compared to the first time he rode the Tour, and hated every second of it. Or at least every stage – flat, mountainous, whatever they put in between.

“That first ride in 2012 was such a shock,” he said. “Just the intensity, the scrutiny that follows you around every moment of the day, I hated every second. I came back in 2013, mentally prepared for how difficult it is, and that’s when I fell in love with it. It was incredible. It’s insane, madness really, 5,000 vehicles driving around France together for three weeks, all for a group of bike riders.

“Then in 2014 I watched it from home after breaking my collarbone in the Giro, and all I wanted was to be there. I couldn’t even watch some of it because I missed it so much.

“It’s a rollercoaster, but an absolute buzz. And it all comes from something that begins as a hobby for so many people. I’m just fortunate enough to call it my job, and manage to make some people happy what is essentially a selfish act of trying to win races.”

Then I asked him about the act of trying to win this year’s race: “Everybody has a bad day at the Tour,” he said. “It just depends on whose bad day is the least bad.”

On the first day, the flat 201km from Noirmoutier-en-l’île to Fontenay-le-Comte, Martin had one of those good days, picking up 51 seconds on defending Tour champion Chris Froome by simply staying safe in the peloton.

By Day Three that was wiped out, the 35km team time trial around Cholet costing him, or rather his team UAE Team Emirates, one minute and 38 seconds.

After two day more days rolling around Brittany, testing his legs from La Baule to Sarzeau, and finishing sixth on the stage from Lorient to Quimper, Martin went into Day Six with a little revenge on his mind. The last time the race finished on Mûr-de-Bretagne, the Alpe d’Huez of Brittany, was in 2015, and Martin was riding at the front, only to lose the final attack to Alexis Vuillermoz of France, finishing second.

Three years later – and five years after winning his first Tour stage into Bagneres-de-Bigorre in the Pyrenees – Martin made no mistake, winning the final attack by one second from another French rider Pierre Latour. “It makes this Tour de France a success for us already, and anything else is a bonus.”

Two days after that, still lying 21st overall, Martin had one of his most bad days, crashing at near top speed with 17km to go on Stage 8, the flat 181km from Dreux to Amiens. Chasing with his teammates to limit the losses, he finished 1:16 behind the peloton and most of his podium rivals. “There’s nothing broken but I’m ripped to pieces,” he said. “I landed on my back but I bounce well.” He dropped to 31st overall, one place behind Peter Sagan.

On the Sunday he rose again, riding the 156.5km of Stage 9 from Arras to Roubaix, featuring 21.7km of cobbled road, in 15 different sections, better than any of the main contenders, picking up a bonus second in case that might count too.

After the first rest day, and on the first day in the Alps, Martin rode harder again, and moved up seven places overall after a bold attack up the final climb, the Col de la Colombiere. It wasn’t enough to reel in stage winner Julian Alaphilippe, but Martin’s time up the 1,613m summit is a record (his 21.50 split eclipses Juan Mauricio Soler’s 2007 mark of 22.05, according to climbing-records.com).

Day 12, Stage 11 from Albertville to La Rosière, and, voila! Geraint Thomas took the Team Sky lead, the stage win, and the yellow jersey all in the one go. Martin finished sixth, taking half a minute out of some his podium rivals, and moved up to 10th overall

The next day it’s up Alpe d’Huez, and, voila, Thomas won again: Martin finished in 12th, a day somewhere in between the good and the bad.

Two days later and Martin had another of his most bad days, on the 188km Stage 14 from Saint-Paul-Trois-Chateaux to Mende, puncturing with just 5km to go on the base of the final climb of the Côte de la Croix Neuve. He lost the bones of two minutes on his general classification rivals, most of which while waiting for a wheel change.

“It is what it is, isn’t it?” he said. At age 31, riding in his sixth Tour, and after finishing sixth overall last year despite crashing on Stage 9 and suffering two fractured vertebrae, Martin knows this is exactly what the Tour is.

Three days after that, on the sharpest 65km Stage 17 from Bagnères-de-Luchon to Col de Portet, Martin’s bobbing helmet popped up again, second only to the Colombian Nairo Quintana, and that moved him up to ninth overall.

Then on Friday’s 200km Stage 19 from Lourdes to Laruns, with an overall altitude gain of 4,800m, a little over half the height of Mount Everest, Martin had another of his least bad days, finishing fourth, alongside Thomas and Froome and Co, and 6:50 ahead of Quintana.

He’s now moved up to eighth overall, 6:39 behind Thomas, and 4:15 off Primoz Roglic from Slovakia in third.

There’s still Saturday’s 31km time trial from Saint-Pée-sur-Nivelle to Espelette, then Sunday’s ceremonious ride from Houilles to the Champs-élysées in Paris, by then the race and podium places decided on whose bad days are the least bad.