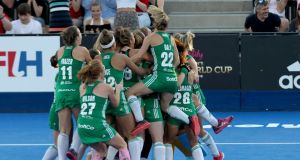 Where will it all end? Ireland’s World Cup run just keeps on rolling as Ayeisha McFerran’s glorious tournament and some sublimely cool heads in a shootout saw them edge out India and take a World Cup semi-final spot.

Pre-tournament expectations were that a group stage win – a first since 1986 – and escaping a group featuring three full-time outfits would represent success in London.

A quarter-final was a bonus but a semi-final? This was nowhere in even the most fanciful of predictions from the side ranked second lowest on the list, one who had previously had to pay to be part of the programme and was outgunned in terms of resources by many multiples.

But they showed an iron will to eventually overcome the Indians and take up their place in Saturday’s 2pm semi-final against Spain – the other surprise package – and then a medal match of some sort on Sunday.

McFerran was heroic, saving three out of four shootouts and once Roisin Upton and Ali Meeke put them ahead in the decisive phase, they were on the road to the final four.

A week ago, a glorious Anna O’Flanagan penalty corner deflection proved the difference, propelling Ireland into new found territory. Top of Pool B was far beyond anything Ireland dreamed of pre-tournament, sending their media profile into the stratosphere.

By game day, bars in Dublin were naming cocktails in their honour, the Chloe Cosmo and the Daly Daiquiri in full flow.

The hockey, however, was far less liquid in normal time. Chances were at an absolute premium throughout. As the first half wore on, Ireland’s midfield started to make most of the play with Chloe Watkins and Nicci Daly while Megan Frazer showed some dazzling touches.

It was a delight to see her make her mark in just her 10th game since recovery from a 20-month spell out with a cruciate knee injury, showing why Graham Shaw gave her so long to prove her fitness for the event.

But end product was lacking as neither side - whether through nerves or the energy-sapping heat – could find the vital incision.

The first shot took 23 minutes before it arrived, Katie Mullan slamming in to Anna O’Flanagan at the near post who got a good touch but Savita smothered well. Rani Rampal tamely rolled India’s only chance just wide as they skirted around the edges of the circle but did little to penetrate.

It continued in a similar vein into the third quarter with only one circle entry registering on the stats sheet. The Green Army held most of the ball as India sat deeper, trying to create more space to counter. When they did, they had few support runners and attacks petered out at source.

The final 15 minutes finally saw the tie open up, Ireland finding more space through Mullan and O’Flanagan while India won the first corner of the game. Rani took on the hit but, like the seven corners in the first meeting, McFerran held her ground, saved and cleared with her stick.

It was the biggest chance for either side and one Ireland coped with well. Again, inspiration was not forthcoming and so the shootout beckoned.

The first two rounds of the shoot-out were also blank before Roisin Upton finally hit the backboard and Ali Meeke doubled up in the next round and there was no looking back.

And there is reason to believe they can possibly earn a final spot. The top sides have been left decimated with Spain, also ranked outside the top 10, the opponent.

The Spaniards have rolled with the punches, too, sneaking into the semis with a last ditch 1-0 win over Germany. It means Ireland avoid the big guns yet again, their run of fixtures proving truly blessed, as the Netherlands and Australia contest the other tie.

With confidence soaring, who is to say they cannot take this on even further?