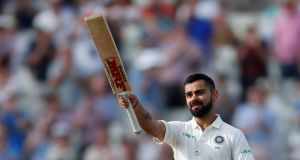 Virat Kohli, the single-handed hero, produced the innings of a lifetime to keep his side in what has become a wonderfully volatile game of cricket.

India’s captain began myopically under examination from Jimmy Anderson but finished majestically against any bowler summoned up by Joe Root. His innings of 149 spanned three sessions and lasted 225 balls and without it India’s chances of victory in this Test match would have long disappeared.

The next highest score in India’s 274 all out was Shikhar Dhawan’s 26.

Kohli’s imperious strokeplay in the evening sunshine was all too familiar, yet in a sense the most impressive element of his innings was his early struggle against Anderson, who dismissed him cheaply so often four years ago.

Here Kohli displayed the humility of a great player. There were no flowery strokes against Anderson. He was hellbent on no more than survival. He was prepared to graft like a mortal. Anderson kept probing, Kohli kept prodding. Ostensibly not much happened and yet this was a riveting, high-class contest from which both players emerged with credit.

But in the end it was Kohli’s day.

Thanks to him England’s first-innings lead was restricted to 13 when it might have been 130. Then, to the tourists’ delight, Alastair Cook was bowled for a duck by another perfect off-break from his tormentor, Ravi Ashwin, the last act of a day of vivid entertainment and the fall of 12 wickets.

Initially a clatter of wickets seemed unlikely once England’s first innings had been polished off without delay. After eight overs of India’s innings the ball, which declined to deviate, was tossed to umpire Gaffaney, who soon threw it back to Root. At the start of the 14th over England tried their luck at the other end with umpire Dar. After a polite glance at the ball he also declined any overtures to change it.

Then Sam Curran found enough swing to hit Murali Vijay’s front pad. England had already wasted one review but they were convinced enough to try again and this time their request was justified.

From here onwards there were no further attempts to change the ball. It had started swinging – just enough – for Curran. His next delivery to KL Rahul produced an edged boundary. Then Curran propelled a wide half-volley, which may have swung a smidgen; a wayward drive and the ball ricocheted on to the stumps. Che Pujara might have left that one.

In Curran’s next over there was enough swing to find the edge of Dhawan’s bat, especially since the left-hander was seduced into playing an airy drive despite the loss of two wickets in three balls. At the other end Kohli began his fascinating duel with Anderson.

Curran had found significant movement at a modest pace. After lunch Ben Stokes swung the ball rather more quickly. His 10-over spell should have produced more than two wickets. Ajinkya Rahane would have been lbw had England reviewed but this mattered little since he soon hung out his bat and was caught at third slip by Keaton Jennings. Dinesh Karthik disappeared as rapidly as his middle stump, which cartwheeled towards the city centre.

India were suddenly 100 for five and on the ropes but now England missed their chance to take charge of the game.

They could not help the fact that Hardik Pandya successfully reviewed an lbw decision off Stokes but then two slip catches were spilt from consecutive deliveries. Most crucially Dawid Malan, at second slip, dropped Kohli, who had a mere 21 at the time, off Anderson. The next ball, which was delivered by Stokes, was edged by Pandya to Cook at first slip and that chance was spilt as well. Suddenly England’s hands were no more trustworthy than those of the ECB’s chairman on the first morning.

Soon Kohli had surpassed his highest score in England (39) and was batting ever more fluently. He added 48 with Pandya, who was lbw to Curran when the ball struck his boot just before his bat. Kohli reached his half-century from 100 balls, whereupon he had another reprieve from Malan, although this was the toughest of chances away to the fielder’s right hand side.

After tea Anderson was rewarded for his earlier efforts when he bowled Ashwin and dismissed Mohammed Shami, caught at second slip by Malan. This was no more than he deserved.

By contrast Stuart Broad struggled, not so much for pace but movement. He is an analytical cricketer and will recognise that he would have bowled more than 10 overs in the innings if he had been on song.

Now Kohli was like a solitary puppet master, pulling all the strings. He dominated the strike and removed the hand brake with a sequence of silky boundaries against a tiring attack.

After the adhesive Ishant Sharma was lbw to Adil Rashid’s googly (though the ball was shown to be missing leg stump on a day when the umpires too often proved fallible) he calmly square-cut Stokes to register his 22nd Test century and one of his best.

The last two Indian wickets added 92 runs, of which Sharma contributed five runs and Umesh Yadav one. Eventually Kohli was caught at backward point off Rashid seeking the strike and his 150th run. By then he had rescued his team and buried a few demons along the way.