Women's hockey World Cup: a bluffer’s guide to the sport 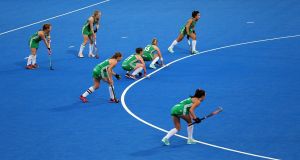 Water-based synthetic. It should be soaked so players can dive for shots and not get rashered by friction burns. They get lightly rashered anyway.

How long does it last?

There are no referees in hockey. Like tennis and cricket, they are umpires.

Yes you probably did bully off at school. But that just shows how old you are. They tip back now. The bully caused too many fouls with hands being hit and players cheating on the number of times they hit sticks, which was three. Starting a match with a foul ain’t no way to begin.

Can you kick it?

No you can’t! And if you do, it’s a free. If it hits a foot inside the D (a semi-circle similar to the one on the edge of the penalty area in soccer)it’s a penalty corner. Matches turn on penalty corners.

Awarded for a foul in the D or an intentional foul inside the 23-metre line, which is the end quarter of the pitch.

The ball is pushed out from the backline to the crown of the D about 14 metres away. The fancy name there is ‘injection.’ It is stopped outside the D and either drag flicked (a sling shot strike by a specialist striker), switched for someone else to strike or driven towards the goal for another player to deflect. There are countless variations. All this happens with four defenders charging out to block. It’s fast so you won’t see what happens - but you will on slow-mo.

A goal can only be scored by an attacking player touching the ball inside the D. A direct hit at goal at a penalty corner has to be below the knee otherwise it would be lethal for the outfield defenders. Goalkeepers are okay, they are heavily padded. A drag flick can go high because it’s only semi-lethal i.e 120 kph.

Watch for Ireland’s Anna O’Flanagan run a bodyline towards the Indian striker to block when defending. She is running down the barrel. Yes it is dangerous.

There is none. That’s why you will have sneaky forwards hiding on the opposition backline.

There is but there isn’t. Largely umpires don’t blow for it unless a player is blatantly shielding the ball with their body.

Players can scoop or flick the ball in the air. But they can’t make it dangerous. The umpire decides that. In our opinion, a flaky enough rule.

You can only use one side. Using the back of the stick is a no no and a foul. Most novices find this difficult as players must use the top hand, the left hand, to turn the stick and always play the ball with the legal, flat side. Hurling-playing hockey players can be spotted because they have their left hand below the right. And the sticks aren’t wooden anymore. They are almost unbreakable carbon fibre or Kevlar.

About the size of a cricket ball but plastic with indentations to reduce aquaplaning. It’s basically a large golf ball.

Like soccer, with similar formations. In fact the Dutch football team has a former hockey coach on board for using the press, full court or half court. Full court is squeezing defenders on the ball near their goal to force errors. Half court is when the entire defending team falls back to the half way line. Three quarter press is. . . well, you get the picture.

Attacking teams are looking for penetrations into the D, the scoring zone, while defenders try to make their tackling count outside the D because any error inside-a foot, stick tackle, blatant obstruction - results in a penalty corner.

The auto pass. You can take a free to yourself straight away. It means defenders who deliberately foul to break play down and slow the game, don’t really gain that much.

In open play the ball can be pinged at the goal from anywhere inside the D. It can be hit, flicked, slapped, pushed, head high or low and it’s all legit.