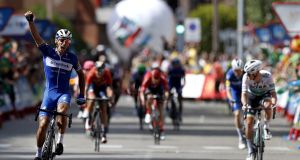 Philippe Gilbert of Deceuninck-Quick Step celebrates his victory in the 17th stage of the Vuelta a Espana with Sam Bennett coming in behind in second. Photo: Javier Lizon/EPA

Sam Bennett put in an impressive performance on stage 17 of the Vuelta a España on Wednesday, finishing second to former world champion Philippe Gilbert on the uphill finish to Guadalajara, and also leaping to second overall in the points classification.

Bennett was one of a large number of riders who made up the day’s breakaway, a move which eventually finished five and a half minutes ahead of the general classification riders. Although other sprinters who were present were dropped on the undulating terrain, Bennett remained in the break and was one of the strongest at the end.

Gilbert’s Deceuninck-QuickStep team had a numerical advantage with five riders in the move heading towards the finish, while Bennett had no teammates. That proved crucial: when Gilbert’s teammate Zdenek Stybar jumped away with approximately two kilometres remaining, Bennett had to make a very early surge with 500 metres to go in order to get up to him.

The Irish road race champion was tracked by Gilbert, who whipped past him with approximately 150 metres to go and went on to win. Bennett came in second, with Rémi Cavagna (Deceuninck-QuickStep) and Dylan Teuns (Bahrain-Merida) leading the others across the line.

In addition to his second place on the stage, Bennett also picked up points when he won the intermediate sprint. This saw him jump from fifth to second in the points classification. He is on 94 points, within catching distance of the race leader Primoz Roglic (Team Jumbo-Visma), who has 117.

However taking a third stage win in the race was his immediate priority. “I couldn’t take them all on,” said a disappointed Bennett afterwards, referring to the five Deceuninck-QuickStep riders in the move. “I don’t know if it Stybar or who it was, but if I didn’t go after him, he was just going to go to the finish.

“Then if I had to go, I had to go really hard so they couldn’t keep on my wheel. I just ran out of legs with 300 metres [remaining]. I didn’t have anything left.”

Bennett has two more opportunities for stage wins, and to try to take over the points leader’s jersey. Friday’s stage to Toledo may well end up in a sprint finish, as should Sunday’s concluding stage to Madrid.

Meanwhile Dylan Groenewegen (Team Jumbo-Visma) won a bunch sprint to take stage five of the OVO Energy Tour of Britain in Birkenhead. He beat Matthew Walls (Great Britain) and Matteo Trentin (Mitchelton-Scott) to the line. Eddie Dunbar was best of the Irish in 57th, also finishing in this front group.

Dunbar remains a fine third overall in the King of the Mountains classification.