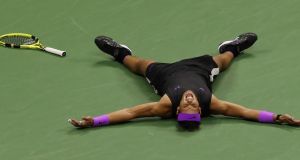 Rafa Nadal has never taken his talent for granted. Of the three players who have defined his era, he is the most humble. So, as he stands on the verge of surpassing Roger Federer’s 20 majors and drawing away from the 16 owned by Novak Djokovic, he knows that beating one of the hunting pack, Daniil Medvedev, to win his fourth US Open was significant in more ways than one.

Sunday’s teeth-grinding five-setter, which he could have ended way before its eventual four hours and 50 minutes duration, proved to everyone – including the winner – that, at 33, he has the will to continue.

For others of that age or thereabouts the questions are different: none dreams of bettering Federer or Djokovic; all of them are happy to be still standing, including Andy Murray, whose comeback from hip surgery continues steadily away from the main stage.

For Nadal it has always been like this. Since he won the first of his 19 majors – at Roland Garros, where he would win another 11 and where he surely will be favourite for as long as he wants – he has lived in Federer’s shadow. So has Djokovic.

Often Federer’s grace under pressure, his sheer artistry in a physical sport and his winning demeanour has made him unbeatable in the eyes of millions. Even when he loses they love him still. There are books written about the love affair. No such tome exists for either Nadal or Djokovic. They are praised prosaically, for the technical mastery they have over a difficult sport.

Yet those who have watched Nadal closely will have seen how the hard work he does away from the court manifests itself in subtle ways in the heat of battle – and there was a lot of heat on Sunday night when, after butchering a smash in the third set when he was close to a straightforward victory, he found ways to win.

In front of him was a young opponent in his first slam final and a player who displays aspects of Djokovic’s stretching defence and Federer’s outrageous cleverness. Nadal prevailed because he had seen it all before, however demanding the struggle became. Only bona fide champions can win when it looks likely they will lose.

As Nadal said after a 7-5, 6-3, 5-7, 4-6, 6-4 win that kept 24,000 fans swaying between the Spaniard and the Russian in their affections: “The last three hours of the match were very, very intense, no? Very tough mentally and physically, too. The crowd were amazing, all these facts that make the moment super special, no? Unforgettable moment.”

For once reference to the crowd was not fatuous. They more than likely did play a part. The New York fans are the loudest, most passionate and certainly most fickle in tennis. At the start they were with Nadal. All fortnight Medvedev had wound them up, behaving like a brat at the beginning, then inviting their derision to give him strength and, finally, winning their admiration for the beauty of his game and his fighting heart in one of the truly great finals.

He was gob-smacked in a totally Russian way, repeating over and again what it meant to him to be part of history. “I’m sure even talking about Rafa’s 19 grand slams, I’m sure he remembers his first final, even though he won it and I lost it. It was an amazing match. It’s an amazing story. All this summer is amazing for me. I will remember every moment of it.”

And there he nailed it. His summer roll is what carried him to the final. Medvedev had won all over the place leading up to the tournament, 12 matches in a row. Crucially, his most recent defeat had been to Nadal, a 6-3, 6-0 spanking in Montreal. But he is young enough for such a score not to unsettle his confidence or self-belief.

Like Bianca Andreescu, the 19-year-old Canadian who, the night before, slew a legend in Serena Williams, Medvedev has the courage of youth. He is not scarred by serial failure. He believes that when he drop-shots from the baseline the ball will float silently over the net and do its job.

He did that time and again to Nadal, whose legs do not have the spring they once did. But Nadal did not fold. Nor did he complain. He drew on the thousands of similar circumstance he has been in to find a way.

And he recognised in Medvedev not just the tennis qualities of Federer and Djokovic but the extra ingredient it takes to be different from the others.

“The way that he fought, the way that he played, is a champion way,” Nadal said. “Just well done for him. I really believe that he will have many more chances.”

He meant that. He will not be around on the circuit to witness first-hand all of Medvedev’s career but he is not disappearing just yet. He is a remarkable champion and very much a unique one.