Amnesty UK: Joshua being duped for fight in Saudi Arabia 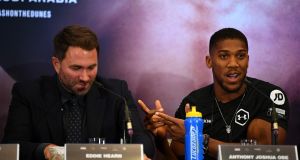 Amnesty International has warned Anthony Joshua that he is being duped by the authorities in Saudi Arabia, where he will be staging his fight against Andy Ruiz Jnr during a sweeping human rights crackdown.

Joshua and his promoter Eddie Hearn have repeatedly tried to deflect criticism of holding their WBA, IBF and WBO heavyweight rematch in Diriyah, on the outskirts of the Saudi capital Riyadh, by claiming that the country is reforming for the better.

However, Felix Jakens, Amnesty International UK’s head of campaigns, told the Guardian that the human rights situation was actually getting worse, with no semblance of free speech or the right to protest.

“Despite the hype over supposed reforms, Saudi Arabia is actually in the midst of a sweeping human rights crackdown, with women’s rights activists, lawyers and members of the Shia minority community being targeted,” he said.

“Civil society has also been silenced in Saudi Arabia,” he added. “Anyone critical of the regime has been exiled, arrested, or threatened. There isn’t any semblance of free speech or the right to protest.”

“There’s been no justice over the gruesome murder of Jamal Khashoggi, and the Saudi-led military coalition in Yemen is still carrying out indiscriminate attacks on homes, hospitals and market-places.”

Last week Joshua said that while he appreciated human rights groups “voicing their opinion” what he had seen in Saudi Arabia had been “phenomenal” and that he felt it was better to engage with the regime rather than just “accusing, pointing fingers and shouting from Great Britain”.

Joshua also claimed that criticism of his decision to fight in Saudi Arabia for a purse reported to be north of £40m was unfair as one man couldn’t “put on a cape and save the world”.

However, Jakens said even if Joshua just promoted on social media his support for activists such as Loujain al-Hathloul – who was arrested last year with 10 other women who had campaigned for the right to drive and has since been tortured, and threatened with rape and death – it would make massive diffference.

“This was never about asking Anthony Joshua to be some kind of human rights superhero. It’s simply a request that he use his incredibly high profile to speak out about human rights in Saudi Arabia,” he said.

“For years the Saudi authorities have been trying to sportswash their image, so when major sporting stars agree to go there it’s a great opportunity to redress the balance - with, for example, a tweet in solidarity with jailed activists, or a few remarks in interviews about the wider human rights situation.

“People do listen to him,” Jakens added. “If, for example, Joshua were to say something about the outrageous jailing of the Saudi women’s rights activist Loujain al-Hathloul, this could provide an important reminder to the authorities that her plight is not going to be overlooked around the world.” – Guardian