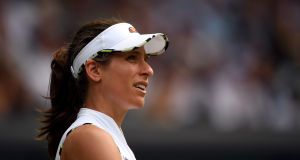 Britain’s Johanna Konta fears tennis might not get back to normal for the rest of her playing career. Photograph: Victoria Jones/PA Wire

Johanna Konta will again lead Britain’s charge at a grand slam title next week when she opens her Roland Garros campaign against the American prodigy Coco Gauff, the sort of match to raise heartbeats and trepidation in equal measure. However the 29-year-old British number one, ranked 13th by the WTA, has wider concerns.

She fears the coronavirus pandemic that has pitched the 2020 French Open from mid-summer into this dank autumn slot will haunt tennis for “a long time”. Konta, who fell one win short of reaching the final here last year – adding that semi-final high-point to those she previously reached at Wimbledon and Melbourne – delivered her gloomy forecast before Thursday’s draw for the last slam of a season that was suspended for six months to guard against the spread of Covid-19.

“There’s a very big hopefulness that, come January 1st, 2021, everything’s going to be normal,” Konta said. “Unfortunately, it’s not the case. It’s going to be very difficult and very different for a long time, possibly for the rest of my playing career. But hopefully in time, not just tennis and not just sport, but everyone will find a way to come through this, or live alongside it.”

Konta, who shrugged off four consecutive first-round exits to finally come to terms with the French clay last summer, is in the same quarter as the top seed, Simona Halep, and has only Heather Watson (up against Fiona Ferro) for home company after Harriet Dart fell in the second round of qualifying on Thursday.

On the men’s side, Kyle Edmund was a late withdrawal with a knee injury, and Liam Broady broke through here for the first time with a fighting 7-6 (5), 6-4 win in a steady drizzle over the South African-born Australian Marc Polmans, winning his fourth close tie-break in three qualifying matches.

The 26-year-old Stockport left-hander, who has to wait until the qualifiers are finalised before he knows his first-round opponent, joins Andy Murray, who opens against one of his oldest rivals, Stan Wawrinka, Dan Evans (Kei Nishikori) and Cam Norrie (qualifier), reunited for the first time since the Battle of the Brits at the National Tennis Centre in August.

“It’s definitely been a bit strange, 24 hours in the same room,” the outgoing Broady said of his mandatory self-isolation in a players’ hotel on arrival in Paris. “No one enjoyed it. The tournament have done the best they can. It’s a bit boring but, when you’re winning matches, it doesn’t matter.”

Broady, who wound up Konta when she left before the end of the BOTB exhibition by parading a cardboard cut-out of her during the players’ televised post-tournament celebrations, laughed it off on Thursday as a light-hearted stunt, and said he would seek her out to explain.

Elsewhere in the men’s draw, the 12-time champion, Rafael Nadal, begins the defence of his title against the unseeded Bulgarian Egor Gerasimov. He will be favoured to reach the final again, probably against the world No 1, Novak Djokovic, whose record 36th Masters title win in Rome at the weekend went some way to lifting the cloud hanging over him since he was expelled from the US Open for accidentally striking a line official with a spare ball. He plays the Swede Mikael Ymer.

Serena Williams, who won the last of her three French Opens five years ago and has not added to her 23 slams since the 2017 Australian Open, may struggle to make an impression over the fortnight. She starts against her compatriot Kristie Ahn, ranked 102 in the world.

1 Gerry Thornley: After 32 weeks the Six Nations is back up for grabs
2 Stockdale and Ringrose on board with expansive Irish game plan
3 Extremes of sweet and sour for Solskjaer as Man United show signs of revival
4 Bennett girding his loins for impossibly unpredictable Vuelta
5 GAA expected to go ahead with championship under Level 5
Real news has value SUBSCRIBE