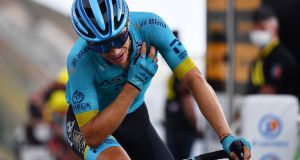 Mon Dieu! Combining the steepest hill and the highest mountain, the hardest part coming near the tail end, the Col de la Loze duly tested and then broke apart the peloton like only the toughest Alpine stages can do. Only not enough to test the likely outcome of this year’s Tour de France – including Sam Bennett’s quest to bring home the green jersey.

As the queen stage of this year’s race it didn’t disappoint either, Miguel Angel Lopez from Colombia timing his final effort and last gasps for the thin air to win his first Tour stage, in his debut Tour, moving himself onto a podium position in the process.

After helping himself to a couple more points on his chief rival Peter Sagan early on, Bennett finished the stage comfortably inside the time limit that invariably tests the best sprinters on a day like this. Those two points, gained at the intermediate sprint at La Rochette, after 45.5km, leaves Bennett on 278 points, 47 ahead of Sagan’s 231, with Matteo Trentin, who had gained 23 points on Tuesday, on 218.

With the stage time limit of 37 minutes and 35 seconds, it was about survival for Bennett from there, and again he showed surprisingly good climbing legs, finishing in the last big group 30:22 behind, in 134th place, three of his Deceuninck-Quick Step team-mates for company. Not everyone made it, Belgian rider Jens Debusschere finishing with the dreaded OTL (outside time limit) next to his name.

“Yeah, a tough one,” said Bennett. “We’d a pretty good fight at the beginning of the stage to try and get some points, and I was feeling good then. But yeah, it was a lot harder at the end. The first climb wasn’t so bad, you could get a bit of a rhythm on it, but that last one, the rhythm was always being broken. It was still a hard day, but manageable. Four days to go now, one more battle tomorrow, and then the real battle begins to take it home.”

In some ways Lopez was on home ground, the 26-year-old Astana rider born and raised in the town of Pesca, some 2,800m high in the Colombian Andes. Not far off his wheels at the 2,304m-high finish on the Col de la Loze – the rooftop of this year’s race – were the top two, race leader Primoz Roglic of Team Jumbo Visma leading the chase in second, 15 seconds behind, with his younger Slovenian rival Tadej Pogacar from UAE Emirates another 15 seconds back third. With the small time bonus, Roglic now leads the race by 57 seconds, with Lopez moving into third, one minute and 26 seconds back.

Dan Martin was part of an original five-man breakaway, later reduced to four, that had almost a six-minute advantage heading into the first climb of the day at the Col de la Madeleine, pressing hard to take the breakaway all the way, but that was reduced to 90 seconds at the top, Martin then dropped on the descent, and was back in the main front group with 33km to ride.

Bennett didn’t waste any unnecessary energy after the intermediate sprint and for good reason: stage 17 ran the 168km from Grenoble to the mountain pass atop the Col de la Loze, above the ski resort at Méribel, by some distance the highest finish of the 2020 Tour – 2,304m high to be exact, also coming after 21.5km of climbing already, on that Col de la Madeleine.

That combination of high altitude and steep gradient broke the legs unlike any stage so far – this the fifth highest mountain-top finish in Tour history behind the Galibier, the Granon, Val Thorens, and the Izoard. With the narrow road hitting 24 per cent uphill gradient with 2.2km to go, in cycling that roughly translates as feeling practical vertical – the final 6km previously just a hiking trail, before being turned into the narrow bike path.

Among the biggest losers were Rigoberto Uran from EF Pro Cycling who finished the day 1:59 behind Lopez, falling down the standings to sixth, with Richie Porte (Trek-Segafredo) and Adam Yates (Mitchelton-Scott) both moving ahead, now sitting into fourth and fifth respectively.

There were some rowdy crowds on the climb too, despite the Covid-19 restrictions, the welcome party at the summit including French president Emmanuel Macron. But there no joy for French riders, with Julian Alaphilippe also in the original breakaway group with Martin, only to be chewed up and spat out by the Col de la Loze.

So too in the end was Richard Carapaz, his lead yo-yoing between a minute and a minute and a half inside the final 6km, before he was reeled in with just under 3km to go – and he ended up 11th, 2:41 down. It was hard end as Carapaz had rode bravely to try to save some face for Ineos Grenadiers, the day their defending champion Egan Bernal abandoned before the start of the stage, only the fourth rider to ever do so in race history, after Bernard Thevenet (1976, 1978), Bernard Hinault (1980) and his Sky Ineos team-mate Chris Froome (2014).

Assuming he gets through the last Alpine stage, Thursday’s 168km from Méribel featuring four categorised climbs before the downhill finish into La Roche-sur-Foron, Bennett also admitted that Friday’s rolling stage 19 finish at Champagnole may well throw up some significant green points, and the Champs Élysées certainly will.

Either way only four days to go, 47 points ahead, and the steepest climb of this year’s Tour safely out of the way.