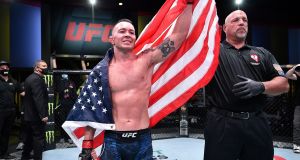 Wearing the distinctive red “Keep America Great” baseball cap, replete with Donald Trump autograph chicken scratched across the bill, a sweating Colby Covington was in the middle of his post-fight television interview at the Apex in Las Vegas last Saturday night when somebody thrust a mobile phone into his hand. Helpfully, he put the caller on speaker so everybody could hear the president’s particular take on his fifth round TKO defeat of Tyron Woodley at UFC Fight Night.

Covington’s response was equally fan-boyish and breathless, attributing his victory and strength to “the dragon energy” the president had given him when shaking his hand at a campaign rally the previous Sunday. After the true bromantics indulged in some more Charlie Sheenesque type nonsense, the leader of the free world went back to studiously ignoring a Covid death toll creeping towards 200,000, and his favourite fighter returned to his television obligations. There, he delivered the kind of racist diatribe that offered clues as to why he’s so beloved in the Oval Office.

“Who did you get a call from?” Covington asked Kemaru Usman, the Nigerian-born, reigning UFC welterweight champion, working that night as an analyst for ESPN. “You get a call from, frickin’, your little tribe? They give you some smoke signals for you? You’re a joke . . . You’re fake news.”

What’s appalling about Covington is that the whole alt-right, ultra-nationalist, xenophobe schtick is just that. An act

Only the latest bigoted outburst from a fighter with a lengthy track record for this kind of thing. In the build-up to his defeat by Usman last December, he questioned whether his opponent was really Nigerian (go for the birth cert is page one of the Trump playbook), repeatedly called him “boy”, and threatened to have his family deported back to Africa. Even after the champion subsequently put manners on him by breaking his jaw inside the octagon, Covington has continued to spew vile nonsense.

When Tyron Woodley, an African-American, used his platform in Vegas last week to speak out for “Black Lives Matter”, Covington denounced him as a communist and Marxist, going on to describe people involved in the movement for racial justice as terrorists and criminals. While these are recurring, tiresome tropes in speeches by the president and his acolytes, what’s appalling about Covington is that the whole alt-right, ultra-nationalist, xenophobe schtick is just that. An act. A cloak he donned for commercial reasons.

On the verge of being cut by UFC in 2017, the previously milquetoast 29-year-old realised he might save himself by playing an exaggerated heel, augmenting his average ability with the type of offensive patter that made Conor McGregor, former fighter turned full-time law enforcement magnet, a very rich man.

After shocking the higher-rated Demian Maia (who was approaching his 40th birthday) in Sao Paulo, Covington screamed into the microphone that Brazil was a dump and its people “filthy animals”. Reaching for a “Make America Great Again” hat was an obvious next step when fleshing out that persona.

Even though he admitted the character transformation was a premeditated career move, a blatant financial calculation, the Trump family still became his biggest supporters. Donald Jnr and Eric turned up to see him defeat Robbie Lawler (then 37) in Jersey last year and their father invited him to the White House. An accolade usually reserved for actual champions of a sport, Covington has only ever held an interim belt. Perhaps the president is so desperate for the acclamation of athletes that he relaxed the qualification rules. Maybe he just admires the fact this is another shameless huckster trying to turn a dishonest buck cornering the casual racist end of a particular market.

The deeper you delve into his back catalogue of effluvium, the less surprising it becomes that the president is so enamoured of his character

A couple of years back, Covington made a video promoting a betting company. The obligatory “Make America Great Again” atop his head, he addressed his audience as “nerds and virgins”, then delivered UFC gambling tips while holding a bobble-head doll of Trump. He was assisted in this endeavour by a young woman in a stars and stripes bikini who had fighters’ heads attached to each of her buttocks. Viewers never actually saw her face but she twerked for the camera while Covington clapped the president’s hands together near her butt cheeks and told the punters who to put their money on.

As with so much else in the UFC’s notoriously lowest common denominator universe, that awful burlesque had the air of a rejected out-take from a WWE script. Of course, misogyny isn’t a stretch for this method actor either. This rhetorician who labelled former UFC champion Joanna Jedrzejczyk a “c**t” and “some ugly boobie woman from Poland”. The orator who paid homage to one of his leader’s most infamous cameos by saying, “Just like Trump, I’m gonna grab these pussies and put them in their place.”

The deeper you delve into his back catalogue of effluvium, the less surprising it becomes that the president is so enamoured of his character. And that Dana White, Trump devotee and featured speaker at the recent Republican National Convention, chooses to keep this repulsive version of Covington around as UFC’s in-house racist even if he remains a lacklustre box office draw.

We hear it. Loud and, unfortunately, clear.