Sally Pearson on the comeback trail in London 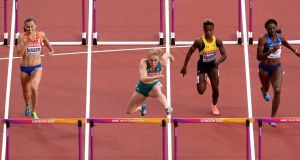 Could this be her comeback year? Five years after winning the Olympic title on this track, and after two years of crippling injuries which threatened her career, Sally Pearson is back in the final of the 100m hurdles.

The Australian will still have to beat the reigning world record holder Kendra Harrison of the US to win back the World title she won in 2011, but this remember is the event where anything can and often does go wrong.

It also remains one of the most competitive – which is why Derval O’Rourke’s fourth place finish in 2009 is worthy of a reminder.

Pearson clocked 12.53 in winning her semi-final, while Harrison – 6-1 on to win the gold medal – only went through as the slower of the two fastest lowers, third in her semi-final in 12.86 after a brutal start, and close clearance over the first hurdle.

At 30 Pearson will certainly fancy her chances on Saturday night (8.05pm), although Harrison has run 12.28 earlier this year, to go with her 12.20 world record also clocked her in last year’s London Anniversary Games, a few weeks before the Olympics which she missed after also messing up at the US Olympic trials.

Pearson has a best of 12.48 this year, her fastest time since winning the 2012 Olympic title. She missed the 2015 World Championships and feared she might have to have her lower arm amputated after she broke it in a “traumatic” fall at the Rome Diamond League that summer. Doctors described it as a “bone explosion” in her wrist.

“I’ve always loved what I do, and I’ve always been motivated,” she said after her race. “I think it’s just a matter of wanting to know that I have more to give – and I do. No offence, but it would have been great to be back running at a world championships anywhere in the world, but I guess it’s a bonus and super special to be back in London.”

After a long rehab from 2015, Pearson then missed last year’s Rio Olympics after tearing her hamstring.

The final line-up for the women’s 800m final on Sunday is now also complete, and unless she runs the wrong way, Caster Semenya should continue her now unbeaten 23-month winning streak at that distance, going back to when the IAAF was forced to suspend its ruling on intersex athletes and hyperandrogenism, in 2015. She won her semi-final in 1:58.90, easy as.

Still the only two women looking any way capable of beating her are Francine Niyonsaba from Burundi, and the 21-year-old Kenyan Margaret Wambui, also understood to be athletes with hyperandrogenism – or elevated testosterone levels seemingly to be of particular benefit in women’s 800m running. They finished one-two in the last semi-final.