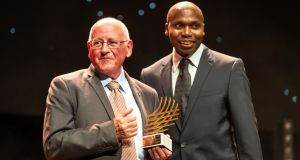 Impossible as it is to briefly surmise the coaching success and achievements of our own Brother Colm O’Connell this came pretty close.

“I would say it’s the mental set of knowing ‘what is running?’, ‘what is it to do this sport?’” said Wilson Kipketer, the Kenyan-born 800 metres runner Br Colm coached from the proverbial nowhere to win four World titles and four times break the world record, indoors and out.

Kipketer said this at the waterfront Grimaldi Forum in Monaco last Saturday night, when presenting Br Colm (as he’s most affectionately known) with the World Athletics Coaching Achievement award for 2019, and for good reason: since beginning his missionary trip to Iten in Kenya in 1976, Br Colm has helped convert a nation into distance runners, and 43 years later still is, coaching Rhonex Kipruto, aged just 19, to the bronze medal over 10,000m at last month’s World Championships in Doha.

Only Br Colm’s coaching philosophy has never been just about the winning, although he’s done plenty of that, working with 25 World champions and four Olympic gold medallists in all, including David Rudisha, the regaining world 800m record holder and back-to-back Olympic champion; it’s more about nurturing and inspiring the next generation of Kenyan distance runners, and no one did that better or more often.

So in the presenting that award on Saturday night, it was equally impossible to not deny the dark cloud that now hangs over Kenyan distance running, and the damage done to the reputation of growing number of former champions all through the needle of doping. Br Colm is certainly not denying it either - and the continued tarnishing not only of Kenyan distance runners but all those involved around them.

“Yes, it’s massively damaging,” he told The Irish Times. “And unfortunately they keep ticking over, an odd guy getting done again, and even if mostly individual cases, that is certainly damaging to the image, and I suppose how the average person in the street sees Kenyan athletics now.

“It is still a small section, but that’s enough to damage all of Kenya, and cast a doubt on everybody. And unfortunately we don’t seem to be able to nail the thing down. Who is responsible? Where is it coming from? Where are these people are getting whatever. With the result everybody gets tarnished. When you don’t have specific athletics or groups either being proven guilty or coming forward saying ‘this is the way...’

“And then of course agents and other stakeholders become possible suspects in themselves. But I think the athletes, regardless of who they are, must take some responsibility. I mean it’s okay for the federation to say it’s foreign coaches or managers, but at the end of the day, the athlete has to take the wrap, own up. No athlete can be that naive to sit by and watch themselves be doped, not ask the question, and then say ‘I didn’t know’.”

Br Colm still lives in the thick of the Kenyan athletics scene, in a small house in the grounds of St Patrick’s High School in Iten, where he taught for 17 years (including seven as headmaster). It was partly because of his success at St Patrick’s that Iten, perched at 7,875ft on the western escarpment of Kenya’s Great Rift Valley, earned its reputation as being “The Home of Champions” - and many overseas athletes all go to live and train there to seek improvements in their own distance running (I know that because I lived and trained there for several weeks in 2011).

This is still no exaggeration. No village on earth - or indeed country, for that matter - has produced more distance running champions than Iten. No one even keeps track anymore, such is the number of Olympic and World champions who were born, raised or else moved here to train. When big city marathon winners are included the list of champions runs to several hundred.

Now the growing number of doping cases in Kenya since 2014 has eroded some of that reputation: there is some reason to be hopeful given Br Colm is equally insistent in that in all his time in Kenya he never witnessed any doping first hand.

“In my time, in my group, I have never witnessed anyone get involved. Still it is disappointing, hugely. Because you’re working in that environment all the time, where what you do is coming into question, or any performance is tainted. So that is disappointing. If athletes would come forward and say ‘this is how I was doped’, or whatever, I think we could nail down people. But that doesn’t seem to be the case.

“The last few years the federation have come out very strong. They’ve set up their own doping control agency, Anti-Doping Agency of Kenya, (ADOK), and they are very active, with lots of seminars and workshops and things like that going on, to try to sensitise people.

“There’s obviously a no tolerance level there, and ADOK have caught quite of a few people, of the recent ones. As far as I can see, there isn’t regular doping, or where these guys start their individual doping I’m just not aware, first hand.”

Winning the outright male athlete of the year award for 2019, for the second successive year, was Kenyan distance runner Eliud Kipchoge. In April he captured his fourth victory at the London Marathon with a 2:02:37 course record, the third fastest performance of all time, the 35-year-old following up in October by breaking through the distance’s two-hour barrier with a his 1:59:40.2 performance in Vienna, an event not sanctioned by World Athletics because of open flouting of pacing and course rules.

“I think there’s two sides to it,” said Br Colm. “It was meant to be kind of an inspiration, that anything is possible, as far as it’s a mental thing, but everyone would look forward to it being broken in normal conditions.

One of the greatest

“But Eliud has always very good. Until recent years, he was just unrecognised, but he’s been picking up medals since 2003, a World title in Paris in 2003, silver and bronze, so he has always been in the mix. He’s certainly one of the greatest now, you would certainly have to put him up there.”

Now aged 71, Br Colm is still close to another of the greatest, Rudisha, but isn’t sure if he can ever regain his heights of 2012 and 2016: he hasn’t raced in two years, and 2019 certainly didn’t go plan, a serious car crash and separation from his wife made worse by the death of his father.

“He’s trying to get himself back together, he still dreams of the great comeback for Tokyo. I told him when you’re ready, and your motivated, we’ll put the beginnings at least back in place.

“It’s a big call, the motivation, getting back in shape. One of the pluses, maybe the temptation, is that no one has really come out and dominated the 800m, in the same way he did, Even if he gets back to 95 per cent, which is about where he was in Rio, and he won that mostly on tactics, and experience.”

Meanwhile considering Kenya’s anti-doping record during since Rio, there is some way go before their overall distance running reputation can be viewed as clean again, if indeed ever. Rio athletics team manager Michael Rotich is serving a 10 year ban for providing advance notice to athletes of doping tests, women’s marathon gold medallist Jemima Sumgong is banned for eight years in January for fabricated her medical records, and 1,500 champion from 2008 Asbel Kiprop was also freshly banned for doping since Rio, leaving that feeling: who else might be?

A week prior to the World Athletics awards night, another top Kenyan distance runner Abraham Kiptum, who last year broke the world half marathon record, was handed a four-year ban for doping violations: Kiptum was caught on the eve of the London Marathon in April, all primed to race apparently, before his running reputation was irreparably damaged, and taking another bit if Kenya’s with it.