Entries are now closed for the 1,200-mile race, with 125 boats on the start line 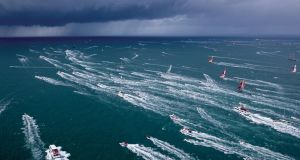 The Route du Rhum 2018, where the destination is Guadeloupe, starts on November 4th from Saint Malo, France

Despite the tantalising prospect raised earlier this summer of at least two Irish boats for November’s single-handed yacht Route du Rhum (RDR) transatlantic race, this week’s confirmation that there will be no Irish entries in the race’s record-breaking line-up is a disappointing outcome for Irish offshore sailing fans.

Entries are now closed for the 1,200-miler on November 4th, with 125 boats on the start line, its the biggest ever fleet. It is also the first time the race has been promoted outside France, and organisers OC Sports say there was keen interest in the prospect of an Irish entry or entries for its 40th anniversary.

The paucity of sailing sponsorship in Ireland, however, appears to be among the obstacles confronting at least four would-be campaigns struggling to ultimately become the first Irish sailor to complete the Vendee Globe 2020 (VG), the single-handed non-stop race around the world where costs run between €3 million to €5 million for a four-year campaign.

From an Irish perspective, the RDR, which also takes place every four years and sails between Saint Malo, Brittany, France, and Pointe-à-Pitre in Guadeloupe, is a missed qualification opportunity in the build-up to VG2020.

Enda O’Coineen’s 2016 aborted VG entry continues to serve as an offshore sailing catalyst in Ireland – as does the €800,000 prize money itself – but at this stage it is unclear if anyone can follow in his wake.

2020 qualification rules say VG skippers must complete at least one of the transatlantic races in the IMOCA Globe series, of which the RDR is one. Skippers who have completed more miles in the Globe Series will also be favoured for entry into the VG. As a result, many skippers do use the RDR as part of their qualification but it isn’t mandatory. The absence, however, of an Irish sailor on the start line in Saint Malo does speak volumes about the readiness of any of the embryonic Irish campaigns.

After RDR there are only two more transatlantic qualification chances remaining over the next 24 months, so the clock is ticking. What’s more, the VG fleet is limited to 30 IMOCA 60s, with at least 35 international campaigns already in the hunt for places.

Mulloy, who is using O’Coineen’s Kilcullen IMOCA 60, and who completed the solo Figaro race in France this month, had qualified for the RDR by dint of a 1,300-mile solo passage in June, but she will not now realise her dream of being the first Irish female into this race. “Sadly, she is not competing. We had one or two sponsorship leads, but we ran out of time,” said campaign manager Neil O’Hagan.

O’Leary’s Ireland Ocean Racing (IOR) team initially highlighted RDR as part of its timeline towards VG entry. His IOR boat, Great America IV, however, was put on the market this summer, with the team maintaining it continues to make “great strides” to secure O’Leary’s place on the start line for a race that carries a hefty €10,000 entry fee.