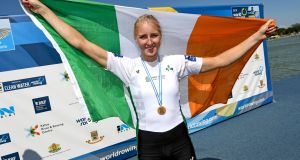 Sanita Puspure punched the air as she crossed the line to win gold at the World Rowing Championships in Plovdiv, Bulgaria. At 36-years-old, this was the Ireland single sculler’s first medal of any type at a World Championships.

“Finally! Finally!” she said as she approached the Irish Times.”My first and it is gold. That’s really special.”

She has competed twice at this regatta, in the heat and semi-final, and she won both by shooting away from the start fast and never letting her lead go.

This time, with windy and choppy conditions, which she dislikes, and taking on the defending champion, Jeannine Gmelin, Puspure raced exactly the same race. The Swiss launched a determined challenge after the 1,000-metre mark, but Puspure met it and actually stretched her lead.

She tired in the final quarter. But she would not let the gold go.

She won by over two lengths, making light afterwards of the tough conditions, which precipitated a new lane draw.

“This felt great. I feel good!” she said afterwards. “I’m not a fan of choppy water, but I suppose when you are in a good racing mood and ready to go there’s not stopping.”

She added that the go-out-fast and stay in the lead was a conscious choice.

“We’ve trained so hard. I have the physiology to do it. So it was just ‘go, and keep going’. At the end I was getting a bit tired. I didn’t have that much left for the last sprint, but I didn’t need it.”

Puspure has often appeared as if she had the ability to win but not the belief. Under coach Dave McGowan and high performance director Antonio Maurogiovanni she has come into her own.

“She really earnt it. She beat the other girls, but she also beat the fear of rough water. That’s the sign of a tough athlete,” McGowan said.