Rowing Ireland hopes to honour the Ireland team, including Gary and Paul O’Donovan and Sanita Puspure, at the NRC event 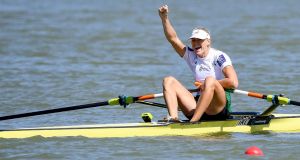 The year 2018 was brilliant – bring on the 2019 season. The All-Ireland Youth and Open Regatta is just over a week away. The event, on Saturday, September 29th, at the National Rowing Centre (NRC), serves as a trial for those hopeful of international action in the season ahead, and features a novel regatta at underage level.

The youth regatta, taking flight for the first time in the generally free month of September, has attracted an entry based mostly in Munster. As an idea it will be judged only after a number of years.

The trial has attracted some interesting entries: heavyweight men Patrick Boomer and Turlough Hughes are there, as are under-23 women Margaret Cremen, a lightweight, and Eimear Lambe, a promising heavyweight (and younger sister of Olympian Claire Lambe) who has been based in Germany.

The UCD men’s pair of Shane Mulvaney and David O’Malley, the under-23 world champions who have moved up to heavyweight (they are already averaging 80 kilograms) have not entered, but may be players in the year ahead. Mulvaney is nursing an injured ankle.

Those who go along to the NRC are also set to see the stars of the World Rowing Championships, though they are exempt from the trial. Rowing Ireland hopes to honour the Ireland team, including men’s lightweight double of Gary and Paul O’Donovan and single sculler Sanita Puspure, world gold medallists, at the event.

Rowing Ireland chief executive Michelle Carpenter is banging the drum for sponsors and/or philanthropists to come on board in the next two years for the Olympic experience. The reports of Rowing Ireland messing up in applications for Sports Council funding are “inaccurate” she says. The sport could certainly do with more funding.

The odds on lightweight rowing being part of the Olympic Games beyond 2020 are lengthening fast. At the Fisa congress on Monday, Fisa president Jean-Christophe Rolland seemed to be already looking beyond the lightweight era. According to the report on the official worldrowing site, he said the Fisa Council felt “it was appropriate now to develop different alternatives to the lightweight categories on future Olympic programmes, and indicated that Fisa is currently investigating the option of coastal rowing as a possible alternative for inclusion in the Olympic programme”.

Should it fall, lightweight rowing will be a loss. “It would be a pity if it didn’t go on. The races are so exciting, with such tight margins compared to some of the heavyweight races,” Ireland coach Dominic Casey told The Irish Times.

It would be ironic if Fisa honours a lightweight crew as one of its best of this season. The nominations have just opened for the 2018 World Rowing Awards. Ireland’s Paul and Gary O’Donovan and Puspure must surely be in the running for men’s and women’s crew of the year.

The O’Donovans may be thrilling to watch, but in any detailed review of their success it is the steadiness of their performance that is remarkable. Crews like Italy move so fast early and late: Ireland have four fast quarters.

Puspure’s success was also based on the confidence that she could produce over the full 2,000m. “I’ve always had the start and the finish,” she tells The Irish Times. She says she is very thankful to the team of people around her, in Rowing Ireland and Sport Ireland and to coach Dave McGowan, for bolstering her rowing – and her self-belief.

“Dave would show me the figures and say ‘do what you have done in training’.” He showed her that she had the physiology and the skill to win. “There is no reason why not.”

To people outside rowing hitting one’s peak at 36 might seem strange, but rowing is in great part an endurance sport. And single sculling is like heavyweight boxing: the mid-30s is well in the zone for top performances.

Two of the greats of sculling, Olaf Tufte and Ekaterina Karsten, have shone all the way into their 40s. Tufte, the Olympic single sculls champion of the 2004 and 2008 Olympic Games (when he was 28 and 32), won an Olympic medal at 40, in 2016, in the double. Ekaterina Karsten, multiple Olympic medallist, competed at Plovdiv in the quadruple – at 46.

Puspure’s first full season with Ireland was 2011, when she was 29; the eight seasons since have seen her take medals in 2014 (European Championships); 2016 (Europeans again and two World Cup regattas). In 2017 she was fourth in the World Championships.