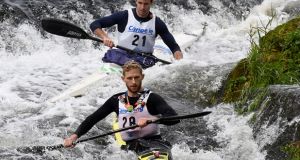 Barry Watkins, winner of the men's K1 at the Liffey Descent,shoots Straffan Weir ahead of Tom Brennan, who finished second. Photograph: Canoeing Ireland

On a day when low water caused carnage on the 18-mile course, British pair Nicky Cresser and Tom Lusty were the winners of the K2 class at the 59th Liffey Descent canoe marathon on Saturday afternoon.

Irish pair Jenny Egan and John Simmons were first in the mixed K2 race while their Salmon Leap club mate Barry Watkins took his first win in men’s K1. Watkins had previously won the K2 title and the junior K1 race. “I had wanted to win the K2 and the K1 before my 30th birthday – and since that’s next April, the pressure was on,” he said.

Finishing five minutes adrift for second was Tom Brennan of Salmon Leap, who had been going for a fourth consecutive win.

In the mixed K2, Egan was winning for a second year. Last year, she won with her brother Peter; this year her partner was Jon Simms, to whom she became engaged earlier this week.

“It was a long hard slog, a very different race to the normal Liffey and very hard to judge your line on the weirs. Still we were fifth over the line, so we’re pleased with that,” said Egan.

Race winners Chesser and Lusty were delighted just to finish the race and take a first win ahead of Peter Egan and Mads Pedersen, the 2016 winners.

“We were fourth going into the first weir at Straffan and got our line right and found ourselves in the lead. After that we kept pushing and no-one caught up with us.”