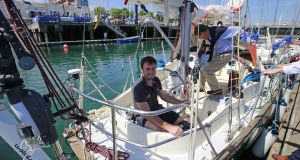 A look back at the sailing year of 2019 reveals a clear trend that only points to further growth in a sector of the sport once scoffed at and written off.

Not so long ago, during an era dubbed the Celtic Tiger, time was arguably as precious a commodity as cash and the notion of heading offshore, often for several nights, was seen as the preserve of a few specialist die-hards.

The evidence that interest in offshore racing is on the rise again, both at amateur and full-time levels, was evident even from the start of the year.

In January, there was the historic victory for French sailor Jean Luc Van den Heede in the Golden Globe Race around the world that proved to be a bittersweet moment for Irish competitor Gregor McGuckin. The 32-year-old Irish solo sailor was dismasted deep in the Southern Ocean four months earlier but had been within 100 nautical miles of the eventual winner when the incident that ended his race occurred.

That McGuckin was unable to finish doesn’t alter the fact that there was an Irish entry in a major ocean race.

His entry follows on from Enda O’Coineen’s appearance in the Vendee Globe race two years earlier that also ended with dismasting but the Galway man went on to complete the circumnavigation a year later.

Although the Golden Globe race was a re-enactment for its 50th anniversary, not only will there be another such race following vintage rules, the organisers have also attracted a fleet of 30 boats to restage a version of the Whitbread Round the World Race.

While both events require full-time commitments, they were historically dominated by amateurs and the new generation of competitors will largely be drawn from today’s offshore sailors.

Meanwhile, the start of the year also saw not one but two Irish campaigns underway in the ultra-competitive Figaro single-handed series sailed in the third-generation of the famous class that featured foil assistance in the 32-footers.

Mayo’s Joan Mulloy and Meath sailor Tom Dolan sailed for a second season in their new boats while Howth’s Conor Fogerty, a former Irish Sailor of the Year for his solo sailing campaigns, also campaigned one of the new Figaro designs.

With offshore sailing to be included on the slate for the the Paris 2024 Olympics in a yet-to-be-confirmed class of boat but featuring a mixed, two-handed format, there is already the prospect of several viable Irish campaigns.

But the birthplace for interest in the major international races is closer to home at amateur level and the annual Irish Sea Offshore Racing Association programme continues to grow season on season.

Paul O’Higgins Rockabill VI from the Royal Irish Yacht Club emerged as overall season winner, an accolade that also in part led to him claiming the Irish Cruiser Racing Association ‘Boat of the Year’ for 2019.

Bushfires notwithstanding – smoke on the waters of Sydney Harbour is a real concern – next week’s Sydney to Hobart race will feature a crew from Howth YC led by Darren Wright and Kieran Jameson on a First 40-footer for the famous 630-mile race.

Numbers for this event have also grown as further evidence of offshore sailing’s rebirth.

For the same reason, the Royal Ocean Racing Club recently announced that due to demand and pressure on space in Plymouth, the traditional finishing-port for the 605-mile course, the 2021 and 2023 editions of the race will instead finish in France, adding some 90 nautical miles to the course.

That 705-nautical miles still leaves the Round Ireland Race, with new sponsor SSE Renewables, in a strong position for growth as the longest middle-distance race in the world next June when organisers expect a fleet in excess of 60 boats to assemble on the starting-line at Wicklow.