The 2019 world running survey: Irish sprint past the British 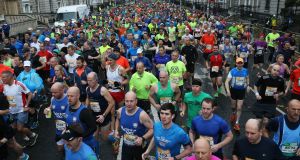 According to a recent survey, four out of five people believe that drinking a glass of red wine every day is good for their health. What’s up with the other guy?

Actually that’s the problem with most of these surveys. Perceptions can often run free, the results are always in need of some context. Some people might believe that drinking a bottle of red wine every day is good for their health. But they wouldn’t feel comfortable admitting it here, would they?

Not everyone felt comfortable about the latest survey published this week by the Economic and Social Research Institute (ESRI) into the lives of senior inter-county GAA players: nearly nine out of 10 are binge-drinking during the off-season – why, because one of them went home early?

Taken in or out of context – the survey based on a questionnaire circulated to 1,947 senior county players in 2017, with 1,037 responses – this sort of behaviour is hardly unique to the intercounty playing population. Binge drinking is defined as six or more standard drinks in one session, equivalent to three pints of beer or six pub measures of spirits, and a quick survey of any Christmas party might well produce a similar result.

Other components of that ESRI survey may be more troubling: 81 per cent of players indicating they had difficulty balancing the demands of studying and playing during their education course; 80 per cent believing their team-mates engage in gambling on either a daily or a weekly basis. Those who work on surveys say respondents are generally more honest when talking about other people’s behaviour.

The Teneo Sport and Sponsorship Index (TSSI), now in its 10th year, was also published this week, a sort of survey of Irish public attitudes towards sport and their sporting heroes, carried out among a nationally representative sample of 1,000 adults, aged 18 to 65; a survey of the general public, in other words, not just another poll of sports fans.

Along with such edifying matters as Ireland’s greatest sporting moment from 2019 (Shane Lowry winning the British Open in Portrush) and Ireland’s most admired sportsperson (two-weight world boxing champion Katie Taylor), the TSSI also listed off Ireland’s top-five favourite sports from 2019: Gaelic games (19 per cent), soccer (18 per cent), rugby (13 per cent), swimming (five per cent), and golf (four per cent).

These things aren’t necessarily easy to gauge (Gaelic games being four sports, strictly speaking) and there was another survey which recently put exercise as the fastest growing sport in Ireland. Excuse me while I walk to the shops. Another quick survey of those trying to back their car out of their driveway might also suggest that running and cycling have never been more popular in Ireland, and they can’t be all on their way for a swim or a round of golf.

When they looked at the number of runners as a percentage of the country’s population, the most dedicated runners are from Ireland

There is at least some evidence of this in the first properly global survey into the state of running in 2019, published by World Athletics (formerly the IAAF) in association with the RunRepeat.com website, certain details of which were sent to The Irish Times thanks to statisticians Jens Jakob Andersen and Ivanka Nikolova.

Described as the first ever mapping of global running participation of recreational runners, it took in some 107.9 million race results from more than 70,000 race events from 1986 to 2019, and from all 193 UN countries. The elite end of competitive running was not included, nor indeed were the lower-level gatherings such as the parkruns and charity races, where running is definitely booming, but still some of the numbers are impressive.

The second part of the survey looked across running distances, from the 5km to the marathon and found that for first time in the history of running, there are more female than male runners in the world, at 50.24 per cent, rising from under 20 per cent in 1986. In the 5km races, close to 60 per cent of the participants nowadays are women.

Now check this out: when they looked at the number of runners as a percentage of the country’s population, the most dedicated runners are from Ireland (0.5 per cent), followed by the Netherlands (0.2 per cent), the UK (0.2 per cent). Our running times rank pretty impressively too.

According to this survey, overall more people run than do any other sport on the planet, although they are slowing down, and male runners in particular. In 1986 the average finish time was 3:52:35, whereas today it’s 4:32:49, a slowdown of 40 minutes and 14 seconds. Runners in these events are also getting older, going from an average age of 35.2 years in 1986 to 39.3 years in 2018. Overall participation has declined by 13 per cent since 2016, when it peaked with 9.1 million runners crossing the finish line, but the growth in some parts of the world is still substantial. In 2018, 1,581 sanctioned road running races were held in China compared with just 22 in 2011. During that same period, participation grew from 400,000 runners to 5.83 million runners.

In Ireland that rate of running participation is also still growing, and in the last five years, the number of finishers has increased by 65 per cent, described as “a rare case in Europe”.

A little less difficult to measure is why people run, although for all the gadgets and cheap thrills at our fingertips these days, the RunRepeat.com survey suggests that the reasoning behind running in a race is changing, people nowadays focusing more on psychological motives rather than achievement motives.

“Maybe the average runner today is more focused on a good experience than an achievement than before,” says Andersen. “That’s not saying it’s overshadowing the achievement motive, but saying that maybe achievement means less today, relatively to the experience itself.”

One out of all the runners I know doesn’t believe that.