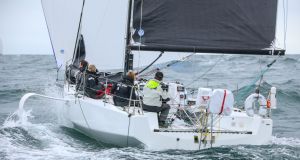 Howth’s Conor Fogerty has declared a bid for the new mixed keelboat discipline at the Paris 2024 Olympics. Photograph: David O’Brien

Ireland aims to expand the Olympic classes in which it competes when Irish Sailing seek expressions of interest on Friday, December 13th, in the new mixed two-handed offshore keelboat for Paris 2024.

This week Irish Sailing confirmed entry into the 2020 Offshore World Championships to be held in association with the Middle Sea Race in October 2020. Such a move is regarded as the opening of a 2024 Olympic offshore campaign, and is predicated by the payment of a €2,500 entry fee to World Sailing.

In June 2019, a declaration was made by Ostar transatlantic winner Conor Fogerty of Howth Yacht Club, who has partnered with Susan Glenny, for a 2024 bid.

Nations will have to qualify for the limited fleet event. 20 L30 yachts will be supplied to competitors, but the organisers have not yet determined the event(s) that will qualify for the championships.

Holding qualifications in chartered boats already available on a regional basis is one idea to cut the cost of campaigning the keelboat that has been guesstimated at €350,000 for a four-year campaign.

The mixed two-handed offshore race will be of approximately four days’ duration, the same as that proposed for the 2024 Olympic Regatta.

The keelboat will join kiteboarding, windsurfing, multihulls, singlehanded and doublehanded dinghies and skiffs, promoting the diversity of the sport in Paris.

Yet before embarking on any new challenge for 2024, last week’s 49er World Championships in New Zealand revealed Ireland has still much work to do for 2020 if it wants to qualify more than one boat for Tokyo.

As it stands Ireland is on the Tokyo startline in the women’s Laser Radial class, a position that will be the subject of a four-way trial in spring 2020. Yet despite lengthy campaigns, Ireland is still looking for places in both the men’s Laser and skiff class, and is now in the last-chance saloon as Olympic fleets are finalised.

The notoriously fickle Italian venue of Genoa will provide the backdrop for the last European place available at the 2020 World Cup next Easter in the 49er skiff.

Ireland’s double Olympian Ryan Seaton and Seafra Guilfoyle and Robert Dickson and Sean Waddilove are both contesting the place, where Belgium and Italy appear to be the principal rivals for the slot based on results at this month’s Worlds in Auckland.

The last two Laser places will also be up for grabs on the Mediterranean Sea, and three Irish trialists hoping for last-minute success are Rio representative Finn Lynch of Dún Laoghaire, Ewan McMahon of Howth and Liam Glynn from Bangor.

Meanwhile, Howth Yacht Club sailors entered in the Stephen’s Day Sydney Hobart Race got more than they bargained for when they arrived into Sydney Harbour this week. Race officials are anticipating a “worst-case scenario” as bushfires threaten to cause the postponement of the bluewater classic.

A Howth Yacht Club team skippered by Darren Wright will compete on the First 40 Breakthrough.

Other Howth sailors racing this Christmas include Shane Diviney on Chinese Whisper and the Australia-based Gordon Maguire on Ichi Ban, both serious contenders for the overall Tattersalls Cup.