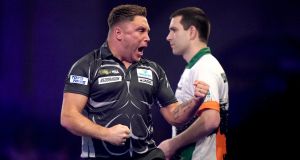 If Gerwyn Price ends up as world champion on New Year’s Day, he may find his mind wandering back to this night, this game and one dart in particular. The bare facts will state that Price, the world No 3 and second favourite, came through his opening test in five narrow sets against Ireland’s Willie O’Connor. But they will scarcely hint at this fraught and bizarre feat of escapology or the disastrous misjudgment that handed him a fortuitous reprieve.

As O’Connor stepped up with four to get and three darts in hand, all Price could do was watch. The deciding set was tied at 2-2 and the Welshman stood on the brink of an ignominious exit. Defying his spectacular pre-tournament form, he had played abysmally. His record of two wins in five world championship appearances was about to become two in six. Questions would surely be asked about his mettle. Meanwhile, with the second, third and fourth seeds eliminated, the tournament would be in danger of becoming a Michael van Gerwen procession.

It was at this point that O’Connor made the biggest error of his career. Having either miscounted or misheard his score, he threw at double 1 rather than double 2, hitting the single and scuppering his chances.

Price duly took advantage and after blowing out his cheeks was able to toast his stroke of outrageous fortune. “Happy days,” he said. “Sometimes you need a bit of luck. I knew he was going for the wrong shot but I wasn’t going to give him a tap on the shoulder.”

A distraught O’Connor left the arena without a word and perhaps the cruellest irony of all was that for much of this game it was he who had looked a picture of composure, his opponent who seemed to be cracking. “The most under pressure I’ve ever been,” said Price admitted afterwards, adding that he had been outplayed by the tall, wiry 33-year-old from Limerick with a studious brow and measured, streamlined action.

There were times when Price appeared to be succumbing to a classic case of stage fright. It took him three nervy darts to win the first set on his own throw, yet even that failed to settle him. He missed at 20. He missed 25. He missed five darts at various doubles to go down 2-1 in sets.

His switching was hopelessly off-beam. Even his favoured double top went sporadically astray. The heat on stage was sweltering and, as O’Connor closed in on a sensational victory, nobody was feeling it more than the Iceman.

The pugnacious Price responded the only way he knows how: by quickening his throw, shortening his stride, stepping up the aggression.

With his popping veins, taut lips and heavy lean, he occasionally looks as though he is trying to butt his darts into the board. In between visits he would puff his lungs out with purpose, mutter furiously to himself, lick his fingers, a fireball of misdirected energy. He nailed a clutch double six to take the match into a deciding set.

Perhaps Price would have won even without O’Connor’s aberration. The Irishman’s level was beginning to drop a little, the 180s starting to dry up, and yet he hung in there. With the score at 2-2 and two clear legs required for victory, he got himself down to 88 with Price well adrift.

Three darts went begging. Then three more. Still, double 2 would put him back into the lead. Then, the brain-freeze.

It was Lyndon Johnson who said that the first rule of politics is being able to count. This is doubly and trebly true in darts.

The wider picture is unmistakable. After a game from which he said there were “no positives” to take, Price will need to raise his level immeasurably to launch the challenge of which he is capable. But he may now feel that fate is on his side. – Guardian

1 Ken Early: Despite coronavirus, Premier League season must be finished if at all possible
2 Police investigating after Jack Grealish is pictured at a road incident
3 Summer tours next in line for postponement as rugby assesses options
4 My favourite sporting moment: When Zidane glided through Brazil in 2006
5 ‘Magnificent’ Conor Connelly remembered after sudden death
Real news has value SUBSCRIBE