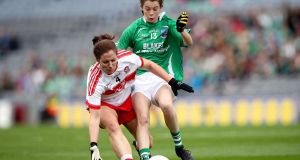 It was en route to GAA training for Derry that captain Cáit Glass got the call: one of her best friends was pregnant. “Of course, I was totally delighted for her. But as soon as I hung up, I felt the tears stinging my eyes, and I was like, ‘Oh, I don’t want to go training.’”

Having found it difficult to get pregnant, the news hit Glass hard. At this point in her life she hadn’t thought she’d still be playing football. “I always automatically assumed that . . . it would be like, ‘Oh, I’ll have my family now and that’ll be the end of football.’ I never thought that the decision would be made for different reasons to stop or to continue playing.”

Glass had been to specialists, to no avail, dealing with non-invasive options such as supplements and medication, meaning her next option was IVF. This led Glass to consider not playing, a huge sacrifice when she hadn’t yet been accepted for the treatment.

In the middle of training it just hit me and a realisation of: ‘I’m okay, like, I’m here and I’m training’

The question wasn’t training or treatment, but how to manage both. For Glass, she knew it was “the right thing for me and I’m still going to try this treatment. But I felt if it was going to be successful it would be regardless of how intense I was training and I decided I’d listen to my body.” So Glass and her husband joined the IVF waiting list and, although still playing, she questioned her role in GAA.

Almost exactly two weeks after agreeing to captain Derry again, Glass got the IVF offer. She now faced a decision familiar to many: pursue ambition or focus on starting a family? After discussions with her husband, she took the one-time option of deferring the treatment for three months, enabling her to play football at the level Derry required. Feeling that it was the right thing to do at the time (“I didn’t feel mentally or emotionally prepared”), Glass got the deferral and “parked it for a little while and didn’t make any decisions about it”.

After that phone call, she took a deep breath and went training.

“In the middle of training it just hit me and a realisation of: ‘I’m okay, like, I’m here and I’m training.’ I don’t know where I’d be without that. Sometimes it’s not the emotional support to sit down and talk through your emotions, sometimes that support is being able to actually get away from that for a while and then come back and deal with those emotions that you have with a kind of different perspective.”

Athletes know the time, energy and dedication given to club and county. Sport is cruel and the great days are few and far between. Real life, meanwhile, goes on in between training, matches, and meal prep, something Gemma Begley, the player development manager of the Women Gaelic Players’ Association (WGPA) is cognisant of. “Only about 6 per cent of our intercounty players even get travel expenses, so we hope the work of the WGPA goes some way to recognising the effort and improving the lot of intercounty ladies’ GAA players.”

Not only was Glass’s team, and training, “a lifeline”, but the WGPA also offered concrete support, through the Personal Development Programme, by providing her with a coach, who was able to listen and give objective advice. The WGPA also has a 24/7 helpline and face-to face-sessions with a network of local counsellors, explains Begley.

“Our motto has always been: be behind the player. Obviously we want players to be the best they can be on the field, but we’re conscious of promoting the development of players’ identities away from their sport too. The amount of time and physical and emotional energy players give to their intercounty team has to be balanced with making sure they’re not falling behind in other areas of their life.”

When the time came for treatment, Glass realised she’d be missing the final game of the 2019 season: a group stage qualifier for the All-Ireland semi final. “It was such a big game for us, it was do or die”. However, it had taken her and her husband years to get here, and putting it off any longer would mean another two-year wait.

She went to manager Paul Crozier, who “was just the best. I felt really guilty about it, they put so much work into this team, on a game that was one of the most important of the year, I’m not gonna be able to play, but once I explained the situation to him, he was amazing.”

It was arguably the most contentious time for Glass to play. “There was so many times I nearly decided not to play football because I thought I should be focusing on treatment and having a family, but I’m so glad that I did decide to keep playing even though at times it was difficult.”

In fact, it was the most successful period of her GAA career, which saw her reaching county finals, and playing in Croke Park.

“I remember watching a documentary where this woman was telling her story about her fertility journey and she had a child at the end of it. You’d think that would be a happy ending for her, that she could look back on those years and say ‘look, it was all worth it’, but actually looking back she cried tears the whole way through telling her story. That really struck me. I don’t want to be looking back on these years with those kind of memories, thinking that was only a sore point.”

Although Glass never imagined that she’d still be playing football, she now thinks, “I’m 33, these have been the best three years of football and to think that I could have missed out on that. So, one of the biggest things I learned through the personal development coaching that the WGPA offered me was to live more in the moment. It’s okay to plan ahead, but enjoy the years you have.”