Upton a worthy November winner after playing through the pain barrier 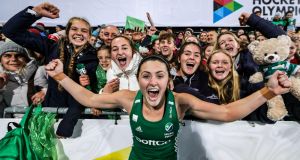 You’d imagine that Róisín Upton plays back the recording of Ireland’s shoot-out victory over Canada in November at least once a day, but not so. She’s actually only looked at it once, and so nerve-wracking was the experience she’s left it there.

Fortunately enough for Irish hockey, the 25-year-old Limerick woman proved nerveless on the night in question, scoring in sudden death what proved to be the goal that sealed Ireland’s Olympic qualification, having failed to convert her earlier effort in the shoot-out.

So it took some guts for her to step up again, the strain of the moment unimaginable, and, while she downplays it now, the sight of her collapsing onto the Donnybrook pitch and dissolving into tears when it was all over was a stirring demonstration of how much it all meant, and of how much pressure these players had been under.

Broken bone And, as we later discovered, she did what she did with a broken bone in her arm. She still doesn’t know for certain when she sustained the injury (“I’ve re-watched the match and tried to see when it happened, I think it might have been in the second quarter, but I’m not sure”), but it was only when she was called up for drug testing after the game that she realised there was a problem.

“I couldn’t screw off the lids or pull open the bags,” she laughs, “it was so sore. And when I woke up next morning it was just throbbing.”

An X-ray later in the day revealed she had broken the top of her ulna, which explained why she had struggled to grip her stick in her normal fashion for the bulk of the game.

“But adrenaline just takes over, and mine was soaring, I didn’t even feel tired after the game. We were all looking at our GPS units after and none of us had ever run that much before. It’s not that I didn’t feel pain – I did, but when there’s that much at stake you just keep on going.”

“Sean [Dancer, the Irish coach] just filled me with so much belief when he said, ‘Róisín, you’re going to go first in sudden death,’ so I didn’t give it a second thought. I like to be in control of my own destiny. If you were asked to step up and take one that could qualify you for the Olympics, well, anyone would.”

Courageous She is, of course, incorrect, but continues to dismiss any notion that she was courageous.

“It’s something we’ve done in training hundreds and hundreds of times, for people watching it might look daunting but this is what we practice all the time, so I don’t feel particularly special stepping up to do something I do every day.”

The moment rounded off the busiest of years in Upton’s life. Having earned a degree in psychology from the University of Connecticut, where she was on a hockey scholarship and won just about every honour going, she completed her Masters in Primary Education in Mary Immaculate College in her native Limerick back in May.

And her return to Ireland saw her rejoin her first club, Limerick’s Catholic Institute, with whom she will back in action in the new year. And she’s proud to have waved the Limerick flag in the Irish squad that secured Olympic qualification, being the sole Munster player on the panel. “I’m never afraid to say it: Limerick is the sports capital of Ireland.”

Her first loves were Gaelic football and soccer, and she excelled at both at underage level, it was only when she went to Crescent College that she opted to take up hockey.

On reflection, not a bad decision.