Mistaken identity as Bennett, arguably, robbed at the RTÉ Sportsperson of the Year 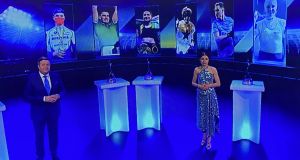 RTÉ display a photograph of of French rider Rémi Cavagna instead of Sam Bennett at their Sportsperson of the Year awards on Thursday night.

In the end it added insult to the wrong imagery and even the simulated applause sounded terribly mute. It’s bad enough waking up in the morning unsure what day of the week it is without harking back to 2020 all over again, and accidentally like a martyr RTÉ provided a suitable reminder on Thursday night of why we all need to keep on keeping on.

Their intentions were good, better late than never perhaps, as they staged the latest edition of their annual sports awards which have been going for 35 years already, only on this occasion in the necessarily virtual sense. Even in the face of a global pandemic there were at least some Irish sporting achievements which rose above the new or old normal, and which certainly deserved to be recognised as such by the national broadcaster.

Still nowhere does the objective meet the subjective with greater fear or envy than at events like this, especially when it comes to naming RTÉ’s outright winner. There probably wasn’t much debate in reducing the six nominees to Sam Bennett versus Katie Taylor, although anyone rooting for Bennett probably got an early hint it wasn’t going to be his night when RTÉ introduced him with an image not of Bennett but of French rider Rémi Cavagna, his young team mate at Deceuninck-QuickStep, who didn’t win the green jersey and two stages in Tour de France and another in the Vuelta a España and even half-disguised behind a red facemask looks nothing like the Irish rider who did.

Given the event was pre-recorded (two days in advance), the mistaken image of Cavagna might have been spotted by someone who knew Bennett usually has a tricolour displayed on his jersey, as Irish road champion from 2019, but instead it was shown again before presenting their Sportsperson of the Year, which went to Katie Taylor, eight years after she won it for the first time. Now read on.

Taylor held the breath of the nation alright, only not near as much as 2012, when she won the gold medal at the London Olympics under enormous pressure and expectation, unquestionably the sporting moment of the year and a lifetime. Taylor didn’t win anything in 2020 she hadn’t won already: she only had two fights in the second half of the year, one was a rematch in the back garden of her promoter Eddie Hearn’s Essex estate, where Taylor brilliantly handled whatever Delfine Persoon could throw at her, and the other was a mismatch against the 37 year-old Miriam Gutiérrez, who had never previously fought outside of her native Spain.

Taylor’s lightweight belts are now undisputed and likewise her enduring appeal and better still she’s far from finished yet, only giving her the 2020 award is arguably the worst decision since 2006, when RTÉ’s all-male judging panel denied Derval O’Rourke, who won World Indoor gold in the 60m hurdles, plus European silver in the 100m hurdles, and opted instead for Kilkenny hurler Henry Shefflin.

That was the night George Hook took issue with the idea of anyone celebrating coming second (even if they already won gold), as he famously said: “a number of years ago I voted against Sonia O’Sullivan because I didn’t think we should celebrate coming second, so I have a problem about coming second...”

Thursday night’s presenters Joanne Cantwell and Darragh Maloney made reference to the “specially gathered panel” who selected the outright winner, although they weren’t named or once heard of (the seven men, and three women, comprised mostly of national sports reporters and RTÉ executives). Maybe it is better we were spared their arguments, especially given RTÉ declared in advance that special consideration should be given to the impact the achievement had on the nation.

Which after three weeks, 21 stages, 58,000m of climbing, 3,482km of road and hailed as among the hardest in Tour de France history, also saw Bennett leave a lasting impact on the biggest and best bike race in the world, wrapped up in one of the most iconic moments in all of sport - a victory in the final stage down the Champs-Élysées.

With that the then 29-year-old from Carrick-on-Suir sealed his second stage win of the Tour, only the fifth rider in history to win in Paris while also wearing the green jersey, which rewards the Tour’s most consistent finisher based on points gained in each stage, and so become only the second Irish rider is history to win that prize after Seán Kelly last won it in 1989, the year before Bennett was born. At the very least the image of Bennett standing on the Tour podium with the Arc de Triomphe as a backdrop would have been better choice for RTÉ.

In the previous seven Tours that Peter Sagan finished, the three-time World Champion from Slovakia had owned that green jersey, only by Paris Bennett finished with a grand total of 380 points to Sagan’s 284; what started out as a properly epic duel finished in a crushing defeat for Sagan.

Even before Paris, Bennett’s special place in Tour history was already twofold: only the sixth Irish rider in the 107 editions of the race to win a stage, Bennett also became only the second Irish rider, after Shay Elliott, to win a stage in all three Grand Tours - having already won three in the 2018 Giro d’Italia, and two stages in the 2019 Vuelta - and which perfectly explained the emotional aftermath of his Stage 10 win at Île de Ré.

Did anyone on the “specially gathered panel” also argue for the fact Bennett’s success in 2020 went far beyond the Tour? That before the season went into lockdown, he won the opening stage of the Tour Down Under and the Race Torquay in Victoria, plus stages in the Vuelta a Burgos and the Tour de Wallonie before the Tour rolled out of Nice on August 29th.

Or that just over four weeks after finishing the Tour, Bennett started an equally hard Vuelta a España, promptly winning Stage 4, was relegated after winning Stage 9, and denied the win on the final stage into Madrid - and with that a triple crown of Grand Tour final stage wins - by the width of his front tyre. Or that 2020 was by far his longest year, 69 days of racing, covering 11,269km.

Did anyone argue for his journey in getting there, the life-threatening injuries and near career-ending setbacks he’s endured since turning professional back in 2011? Knowing a little about how Bennett thinks this decision possibly won’t bother him much, although he does care a little about his image, and in that case he was arguably robbed. Either way he will keep on keeping on.