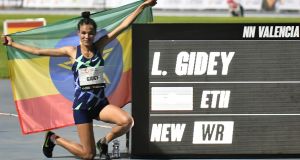 We were down by The Devil’s Elbow where the Glencullen River marks the border between the Dublin and Wicklow mountains when the super bouncy foam and full carbon plate inside my running shoes began to take hold.

It was early Wednesday morning, and super icy too, and when you’ve recently set another birthday against the realisation your life is slowly receding behind you then it’s only natural to seek every possible advantage to keep you propelling fast and forward. Especially when the road ahead suddenly ramps ferociously uphill.

In the end and much to my delight it clocked up as a new season’s best and a course record for exactly one hour worth of running, only was it fair or unfair given the marginally extra height of ground beneath my feet?

This debate around the technological improvement in running shoes is already well worn, and the last thing it needs on the heels of 2020 is any further snippet of blurb for the brand that rhymes with spiky, not bike. They may have started it, and given the spate of world records in 2020 it may still run for a while yet. But if the new year represents any sort of line it’s surely to separate the here and now from the there and then.

I was talking with Sam Bennett in Carrick-on-Suir over Christmas and he was reflecting on some of the highlights of his year since the last time he was home, which was back in April, chief among which was winning two stages and the green jersey in the Tour de France and then another stage in the Vuelta a España.

Part of that reflection was the fact Bennett might well have won more, only at times his body simply wasn’t up for it. He knew that because of some of the improvements in cycling technology, namely the now standard power meter, which allows the rider to track and measure their individual performance over say the length of a Grand Tour stage.

Positioned in either the pedal crank or rear wheel hub, the power meter acts as a sort of fancy fuel gauge and rev counter, the power in this case being the rate at which energy is being used by the rider over a given time, and handily measured in watts, same as your household electricity is.

Bennett made several references to his power meter over the course of the conversation, and not just in the timing and effort of his bunch sprint, which can typically hit close to 1,900 watts; this careful measurement of power output also helped keep him within the time limit on the high mountain stages in the third week, without which his Tour interest may have ended.

At times his power meter also told him things he may not have wanted to know, such as in the final stage of the Vuelta, which finished with a flat-out sprint in Madrid. Bennett had already won stage 4 (and was relegated after winning stage 9), only to be denied the win on the final stage by the width of his front tyre, losing out in a photo finish to his young German rival Pascal Ackermann.

It would have been the Triple Crown of Grand Tour sprint finishes, so rarely achieved in the sport, only he had to settle for second, for the second year running. His power meter also told him he was missing around 400 watts in that sprint, which can happen when you ride two Grand Tours back-to-back, and no matter how badly you want that last win.

You could like me be into what might be called high-end cycling for over a decade now and still struggle to get up to speed with some of the technological improvements.

Just when you think you’ve figured out the best depth of the super bouncy handlebar tape or the ideal width of the new disk brakes, you fork out another grand on a new set of carbon rims that can properly fit tubeless tyres, which at that price must be an improvement. And surely those custom-painted bikes must offer an unfair advantage?

That’s not saying the UCI, the governing body of world cycling, doesn’t have some strict and some might argue silly rules as to where some of these technological improvements must end, from the weight of the bike itself to the height of socks allowed on the rider. Only like the golf club and tennis racket, the football boot and the surfboard, there is at least some acceptance the technology has moved on from five or 10 years ago, and likely will again five or 10 years from now.

Which is also why it’s probably time to back off on Seb Coe, the president of World Athletics, who it seems still can’t escape the question of whether these running shoe improvements are fair or unfair.

Coe did several rounds of end-of-year interviews and the spiky matter was still to the fore, even if World Athletics did eventually amend their rules on shoe technology at the start of 2020, recently amended slightly to allow for proto-type shoes in competition, still while keeping within those rules.

“At the moment I’m pretty calm about this,” Coe said.

“And the balance of judgment here is always – and I guess this is a personal instinct of mine as well – that we shouldn’t be in the business of trying to suffocate innovation. The challenge has always historically in our sport been the balance or trade-off between technical innovation and development and codification. And I think we’ve got that balance about right.”

It’s not just shoe technology on the track, field and road by the way: Joshua Cheptegei and Letesenbet Gidey broke the men’s 10,000m and the women’s 5,000m records within an hour of each other in Valencia last October with a carbon plate inside their running spikes, designed to create a sort of minor catapult effect, while also using the new Wavelight system, a sort of inside-track pacemaker via LED lighting, though probably not quite as telling to the athlete as a power meter.

Technology in any walk of life is often a tightrope between perfect and overkill, and either way there’s no turning back on it, which is also why anyone still moaning about improvements in a running shoe sounds so 2020. Especially when the road ahead suddenly ramps ferociously uphill.