Annual meet was limited to just 1,000 spectators which made an intimate atmosphere 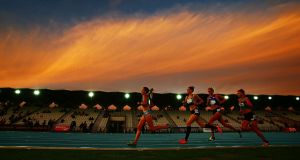 File photo of the 2017 Zatopek which takes place every year in Melbourne. Photo: Scott Barbour/Getty Images

I was sitting on one of the park benches at the Box Hill running track in east Melbourne on Tuesday evening, enjoying the warm temperatures and a cold bottle of Furphy Beer, engrossed in the distance running unfolding in front of us.

A long way still from the Tokyo Olympics, but some evidence perhaps that things might soon be back up and running.

The Zatopek athletics meet is an annual event in Melbourne, set up in 1961 by the Victorian Marathon Club as a method of promoting distance running in Australia and encouraging young athletes to aspire to run in the annual 10,000m event and compete alongside the best runners in Australia.

It’s named after the great Czech distance runner Emil Zatopek who at the 1952 Olympics in Helsinki achieved legendary status when, after winning gold medals in the 5,000m and 10,000m, he also lined up for his first ever marathon and won his third gold medal – adding to his 10,000m gold and 5,000m silver medals from the 1948 Olympics in London.

It was Fred Lester, who arrived in Australia in 1939 as part of a group of 20 German-Jewish refugees, an avid runner and long-time friend of Zatopek as secretary of the Victorian Marathon Club, who had the foresight to establish the annual 10,000m race and catch the imagination of the Australian public. The first event in 1961 was won by Ron Clarke and in 1963 Clarke set a world record of 28:15, and with that the importance of the race was established for athletes and athletic fans. In 1985 Emil Zatopek was a special guest for the 25th running of the race adding his personal stamp of approval to the event.

The 60th running of the “Zatopek”, as it is amicably known, was postponed from its regular early December date and was held this week, attracting the top Australian distance runners chasing Olympic qualifying places and times.

Over the years the Zatopek has grown to include a women’s 10,000m first held in 1976, not because women were discouraged from running but there was already a 3,000m event established in the programme. There was a limit of 1,000 people at the venue so the intimacy of the local track would add to the atmosphere and competitive racing was a feast for those taking part and cheering from the sidelines.

The Box Hill athletics club played host to the Zatopek for the third time, with current restrictions allowing a smaller venue more control for Covid safety protocols. The track is nestled amongst suburban houses, hidden away and sheltered from any wind so more favourable with the athletes taking on the 25 lap event.

Down through the years the Zatopek has grown and become established on the international calendar with athletes travelling from Kenya, USA, Ireland, Japan and New Zealand, amongst previous winners.

The Zatopek race has been used as the National Championships, Victorian Championships and Olympic Trials for Australian athletes down through the years. The program also includes a chance for athletes to get in an early season race over 800m, 1,500m and also the coveted junior 3,000m titles named after Australian athletes Rob De Castella and Lisa Ondieki; with the 2021 date allowing athletes who turn 20 this year the exception to run when they would’ve otherwise missed out due to the postponed event taking them out of the junior category.

In 2021 it was a chance for athletes to finally race and set their sights on the Tokyo Olympics, though at this stage it seems so many other countries are on hold while Australian athletes are surging forward.

The often questioned early season may be an advantage for qualification this year with so many events still unconfirmed and many athletes will be left scrambling as the time continues to move forward and the pandemic continues to rage across many parts of the world.

A piece of history was also established on Tuesday night, the first time in the 60 year event history the women’s 10,000m was given centre stage, the main event with seven women chasing the Olympic standard, six Australians including Mayo-born Sinead Diver, now representing Australia, and Andrea Seccafien, based in Melbourne looking for the Canadian record. Defending champion Genevieve Gregson was hoping to improve her time from a year ago and also retain her title.

The race was dominated by Victorian athletes, with 21 year-old Rose Davies from New South Wales and Izzi Batt Doyle of South Australia hoping to spoil the party for the local girls.

There was talk all week of the pace and predictions, the pace was set by Melbourne track club training partners Sarah Billings and Nathalie Rule, leading the way for Sinead, Genevieve and Andrea to then take turns at the front in the latter stages and keep the pace going. As it turned out, despite what seemed a calm evening nestled in the suburban streets, there was a slight breeze making its presence felt.

There may be few opportunities to race right now, but when they do arise athletes need to be ready to take every advantage

The race record of 31:26 held by Susie Power, and Olympic standard 31:25, all seemed achievable but as Jerry Kiernan was famously quoted as saying “we don’t race on paper, the race will be played out on the track”.

At the end of the day the race becomes more important and in this case those that were tactically astute came to the fore in the latter stages. After reaching halfway in 15:50, the record and qualification standards would require a monumental effort in the second half of the race, the pack split with five laps remaining as Izzi Batt Doyle and Rose Davies the least experienced over 10,000m battled to take the lead. There was still hope for the Canadian record of 31:41 as Andrea Seccafien gamely hung on for 3rd place but it was all a bit too late to regain the lost time.

The lead changed three times in the last 600m but it was Rose Davies with a blistering 65-second final circuit lap who came home for the win in 31:39, ahead of Batt-Doyle 31:43 and Seccafien 31:45, all three securing personal bests. It was a first national title for Davies, first Zatopek, and now opens the door for Olympic selection if she can find another 10,000m race and achieve the required time.

The men’s race was a more predictable affair with Melbourne Track Club training partners Brett Robinson and Jack Rayner taking charge after the pace maker got them through 3,000m. Strung out at a decent pace, Robinson burst away and held a gap over Rayner for the final 10 laps and he was never challenged as he went on to win his second Zatopek.

With Brett and Jack already qualified for the Olympic marathon, the Zatopek was merely a break in the monotony of training which no doubt many athletes around the world are experiencing in these restricted times.

There may be few opportunities to race right now, but when they do arise athletes need to be ready to take every advantage and remain optimistic that their hard work will be rewarded with the Olympics going ahead this summer. For the athletes at least, everything is now under starter’s orders.