The coach instilled self-belief in his runners, but wasn’t afraid to give the ‘sh**e’ talk 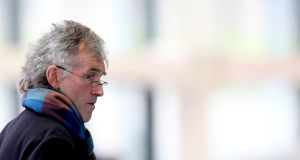 There are lots of different ways for a coach to tell their athlete they might be a little off-colour today, and for Jerry Kiernan this would often be chief among them. It could be gently tailored to suit the exact mood or setting, and if the athlete took any lasting offence they probably had the wrong coach.

From early in his coaching career – not that Kiernan ever considered coaching a profession, or indeed had any qualification beyond once being a brilliant runner himself – it was also obvious there would be nothing moderate or concise about his method. Instead, Kiernan raided his own vast running experience and that of his peers and applied it not as a science but as an art. Now read on.

In 2009, Joe Sweeney found himself caught between being the most promising young distance runner in the country and being unable to make the start line of a race. Sweeney suspected he simply wasn’t training hard enough, perhaps just needed more hardening, so he consulted Jerry Kiernan, who promptly delivered his sh**e talk.

They’d run a short lap together around Belfield, and Sweeney was sweating the proverbial buckets, so Kiernan stopped him in his stride and straightaway arranged for him to see Dr Joe Conway, in nearby Blackrock, knowing he was a man who knew all about the science of haemoglobin concentrations.

Shortly after that, Sweeney found himself in hospital, the nurses looking at him in the bed wondering if they should administer a blood transfusion. They’d just seen the results of his haemoglobin concentration, which was about half that of a healthy young man his age. At that point Kiernan agreed to coach Sweeney on the condition he didn’t run again until his blood values returned to normal. Just over a year later, across the snow-covered fields of Gransha Park in Derry, Sweeney won the first of four National senior cross-country titles by over half a minute.

Kevin Dooney certainly knew his coach had been unwell in recent months, but never imagined getting the news on Thursday that he was suddenly gone

Kiernan told me that story himself, describing Sweeney’s comeback as “almost transcendental”, not because he was seeking any credit; he was simply crediting his own experience with runner’s anaemia as help to recognise it in another. Or, when the student is ready, the teacher will appear, as the Zen Buddhists like to say.

Con Houlihan always maintained he started out in teaching so he could learn from his students, and Kiernan had a similar approach to his coaching. He didn’t bring Ciara Mageean and John Travers back from similarly low ebbs in their running to winning national senior titles without first learning of their own particular life experience, and, when he did, the first and lasting person they still credit is Kiernan.

This is the sort of influence that continued right up to Kiernan’s death on Wednesday night, aged just 67. Kevin Dooney certainly knew his coach had been unwell in recent months, but never imagined getting the news on Thursday that he was suddenly gone. Impossible as it still seems, Dooney also lost much more than just their coach-athlete relationship, ample evidence of which is provided in his reflections of their living it.

At around 10.30 on Wednesday night, he’d texted Kiernan to playfully alert him of Real Madrid’s shock exit from the Copa del Rey, at the hands of Spanish third-division side Alcoyano, knowing full well Kiernan’s obsession with Barcelona. They also agreed a training plan up until Sunday, signing off with the promise to meet for a coffee and another life lesson as soon as time allowed.

For Dooney, like many of his athletes, this was all part of Kiernan’s art of coaching, a lot of which is being lost in more modern times. If Kiernan had just cared about Dooney the runner then it was unlikely he’d have helped bring him through his mental health struggles, after his return from Yale University in 2016, to his winning of the 2018 senior National Cross Country Championships.

“Whenever we had a 10-minute phone conversation, the first minute might be about running, the other nine minutes could be about anything from football to the books we were reading. And because I was coming back from injury, Jerry was careful to make sure we talked less about running, and more about anything else. He cared about the person on that level, what else we were up to, our relationships, all of that.”

Dooney’s father, Roy, happened to be a peer of Kiernan, his marathon best of 2:13.25, run back in 1992, just under Kiernan’s best of 2:12:20 on the Irish all-time list, although their coach-athlete relationship happened more by accident than design – especially given Dooney remains a Raheny runner while Kiernan was always of Clonliffe.

“Because I was living at home on the southside, working in town, it just made more sense to train somewhere closer like UCD, and just started showing up on Tuesdays and Saturdays with my brother Conor. There was never anything official, I don’t think I ever even asked Jerry.”

Nor was there any talk of remuneration. “God no, it’s what he lived for, wanting his athletes to succeed. He would be embarrassed or annoyed if you bought him a bottle of wine at the end of the season just to say thanks.

“And he always felt bad if he couldn’t make it to UCD, because he wanted to see his athletes, or wanted to get a text straight away, to hear exactly how the session went. It was elite in one sense, but also every casual; the group could be 30, 40, most of them just training to finish the Dublin marathon, not to win. He had so many athletes, gave them all the same attention.”

Before winning the national cross-country, he also put this unshakeable confidence in me, told me straight up if I was healthy on the day, I’d beat them all

All of whom could also be subjected to Kiernan’s occasional sh**e talk.

“He was just completely honest, possibly to a fault in this day and age, only because he would tell you exactly what he thought about your race. But never in a mean way. It was always about improving you, never to take you down. He only said something because it needed to be heard, to improve you as an athlete or as a person.

“Before winning the national cross-country, he also put this unshakeable confidence in me, told me straight up if I was healthy on the day, I’d beat them all. And I liked his style. I’m not one for the lactate testing, or the heart-rate monitor. I like to run off how I feel, and Jerry could look at me and know exactly how I’m going.

“When I came out about my mental health issues as well, he was fully there, fully supportive. I essentially took two months completely away, but he would still call, or text, invite me down to the training group for just a walk around and a chat. There was never any pressure, and he certainly kept me in the sport, nurtured me back, and that’s when I realised Jerry was a lot more than just a running coach.”

Which is exactly what the sport, and all who knew Jerry Kiernan, lost this week.

3 Budd Schulberg: The screenwriter who made Marlon Brando a star