What motivates us to keep running? Some classic novels might give a little clue 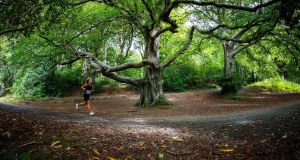 ‘You’re in the scene, not just watching it anymore, and the sense of presence is overwhelming,’ writes Robert M Pirsig in his philosophical novel Zen and the Art of Motorcycle Maintenance. Photograph: Bryan Keane/Inpho

The book is 424 pages long and was started early in the first lockdown, continued throughout the second, and just finished at this point in the third. This being the same book that was first started and finished over a similarly lengthy spellbound period some 30 years ago.

There is no quick or easy way of reading Zen and the Art of Motorcycle Maintenance, only your own way, and if that’s a few occasional pages spread out over the best part of a year, then that’s suitably in check with some of its central themes.

Better to travel than to arrive. Quality is a journey and not a destination. The race is not always about the finish line. The only Zen you find on the tops of mountains is the Zen you bring up there.

Robert Pirsig had several of his own personal motivations for writing it – from being a nine-year-old with the crazy high IQ of 170, trying to connect with his classmates in Minnesota, to undergoing electric shock therapy in the early 1960s. The book was eventually printed in 1974 after five years of rejection from 121 publishers (a record, apparently), cut down from about 800,000 words, before going on to sell more than five million copies, in 27 languages, making it one of the most-read philosophy books of all time.

Not that Pirsig ever considered it a book solely about philosophy. Part travelogue, part autobiography and ultimately about the foundations of values (the book is subtitled An Inquiry into Values), the story unfolds as a partly fictionalised account of a motorcycle road trip from Minnesota to California that Pirsig took in 1968 with his 11-year-old son, Chris, and two friends.

Indeed, Pirsig never liked to talk about the book at all, rarely engaging in interviews or public appearances and – like JD Salinger and Hunter S Thompson – living as a recluse up to his death in 2017, at the age of 88. “It is not good to talk about Zen, because Zen is nothingness,” Pirsig said in 2006. “If you talk about it you are always lying, and if you don’t talk about it no one knows it is there.”

In his famously short foreword to the book, Pirsig also told readers that despite its title, Zen and the Art of Motorcycle Maintenance should “in no way be associated with that great body of factual information relating to orthodox Zen Buddhist practice. It’s not very factual on motorcycles either.”

Nor is the book is any way associated with sport, or indeed distance running for that matter, although Pirsig playfully lifted his title from Zen in the Art of Archery, published by German philosophy professor Eugen Herrigel in 1948, based on his experiences studying Kyudo, a form of Japanese archery, when living in Japan in the 1920s. Zen in the Art of Archery in turn influenced Tim Gallwey’s classic The Inner Game of Tennis, also published in 1974, Herrigel and Gallwey both approaching sport and life as opportunities for learning inner co-operation.

This is also where Pirsig’s ideas can apply to the art of distance running, and particularly at a time of social distancing. Early on in his book, he singles out the simple art of moving across the open ground at speed for making you more “aware of things and meditating on them”, and especially if unhurried. “In a car you’re always in a compartment, and because you’re used to it you don’t realise that through that car window everything you see is just more TV. You’re a passive observer and it is all moving by you boringly in a frame... On a cycle the frame is gone. You’re completely in contact with it all. You’re in the scene, not just watching it anymore, and the sense of presence is overwhelming.”

This sense of presence can also be overwhelming for the distance runner, if similarly unhurried, the simple act of putting one foot in front of the other in quick succession clearly not coming at the same speed at the motorcycle and yet still well in check with Pirsig’s themes.

Forrest Gump said that it used to be he ran to get to where he was going, he never thought it would take him anywhere, and the socially distanced runner, now back running within a 5km radius of their own home, may find themselves caught somewhere in between.

Depending on the exact mood or feeling of idle decay, my morning or evening run can cross between the Dublin and Wicklow mountains where there is usually no one to scare or to scare me along the way except for the odd fox and hare and the always-unexpected glances of the wild Sika deer. Even where such self-isolation is not a given, some of the principles remain the same – starting with the main reason why most of us go running to begin with.

This should be a time for clearing the head as much as possible, so social distance runners should leave the headphones at home. There’s nothing wrong with an occasional blast of Rage Against the Machine or Sigur Rós through the headphones, should the self-motivation be running a little low, but if or when sharing your 5km radius with fellow runners and walkers, it’s better to keep all your senses properly alert.

Many runners I know, myself included, are conscious about running up behind anyone unannounced – we know it’s not a welcome exercise. So if for whatever reason you don’t hear us coming, don’t take it personally either.

Early in the first lockdown, Prof Kingston Mills told this newspaper that distance runners moving at any reasonable speed presented no significant risk of spreading Covid-19. Mills is eminently qualified on both fronts: a professor of experimental immunology and head of the Centre for the Study of Immunology at Trinity Biomedical Sciences Institute, he’s also run a 2:13.55 marathon and represented Ireland over the classic distance on the world stage. So of all the outdoor pursuits, social distance running should be as Covid-safe as any.

Given the extra pressure on that 5km radius within parks or green spaces, it’s probably wise and recommended we all just slow down a little – the faster-paced days and races to aim for will eventually be back.

What is certain about Pirsig’s book is that he was never propounding a new philosophy, but a return to the more universal and traditional, and the same could go for the art of social distance running. There shouldn’t be anything lonely about running socially distanced either, no matter where that 5km radius takes you. Same as in Alan Sillitoe’s 1959 novella The Loneliness of The Long-Distance Runner, a mere 40-page spread that still best captures the essence and purpose of why people run.

It’s this aloneness, not loneliness, which Sillitoe suitably celebrates, and,even within the 5km radius, where every distance may not be near, there should still be enough room and, more importantly, headspace for everyone. Quality is a journey and not a destination.