Rowing: UCD seek a 10th Gannon Cup in the past 11 years

Continuity gives Trinity women the edge in the Corcoran Cup 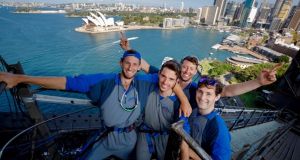 UCD’s senior eight will be favourites to retain their Gannon Cup crown in the annual colours match against Trinity on Sunday (midday) in central Dublin.

Seeking a 10th title of the past 11 years (2015 was the surprise), they have a strong stroke pair in Ireland World under-23 medal winners David O’Malley and Shane Mulvaney, an honour shared by number four man Andrew Goff. They are up against a coach in Trinity’s Richard Ruggieri who has never experienced the Colours Races before.

And yet, it is Trinity who have more continuity in the crew. O’Malley and Mulvaney are the only returnees from last year in the UCD eight, while Trinity have Mark Quigley, Andrej Liadov and William Doyle – and they have Turlough Hughes, who won a Gannon Cup with UCD back in 2012.

Last year UCD took command early and won well; it might be a closer race this time out.

In the women’s senior race for the Corcoran Cup, Trinity’s advantage in continuity is even more marked: they have three rowers from last year and another, Lauren McHugh, who was injured in 2017 but has competed in three Corcoran Cups. UCD LBC have gone through an upheaval in the last year and have a new crew. Trinity, who would have been real contenders last year if their rudder had not fallen off, look a hot tip here.

Those seeking to row on St Patrick’s Day should go north, where the Lagan Head of the River features three races, at 10.45am, 1.15pm and 3.30pm.

Northern rowers have been busy. Fresh from impressing at their own Erne Head last Saturday, Enniskillen RBC recorded two excellent results at the Schools’ Head of the River in London on Monday. In the first eights’ category, their girls’ eight won and the boys finished second. The crews took fifth and 10th overall. The boys had started 28th.

Irish rowers have also been gaining admirers in more far-flung places. Nineteen-year-old Daire Lynch, a Clonmel man now at Harvard, broke six minutes for 2,000 metres on the ergometer. Down under, the quartet of Paul and Gary O’Donovan and Mark O’Donovan and Shane O’Driscoll will compete in the Sydney International Rowing Regatta, which starts on Tuesday.

The Skibbereen quartet’s time in New Zealand and Australia has been something of a public relations coup for Ireland. There have been interviews on New Zealand television and complimentary profiles on the Rowing Australia website, which also posted a picture of them on Sydney Harbour Bridge. Someone should really use them in a promotional video for the country!

The big prizes come in the summer and autumn in Europe. The Ireland Assessment on March 24th and 25th will not feature the Skibbereen men, but Ireland high-performance director Antonio Maurogiovanni says that that the trial in May (17th to 20th) will decide the senior crews which go to the World Cups. The juniors will also have a May trial.

The Italian says that it has “yet to be decided” who will coach O’Donovan and O’Driscoll, who have moved up the heavyweight ranks, when they return to Ireland. The decision will be made in consultation with the rowers. It may be that the best way forward is that lightweight coach Dominic Casey continues to coach them. “If so, why not? He has done a good job,” Maurogiovanni said.

The HPD says he wants to see Ireland heavyweight rowers competing at the World Under-23 Championships. He sees the need for “sacrifice” from clubs and universities and the need for Rowing Ireland to be supportive.

He spoke to representatives from universities in recent weeks and made a point: if one female athlete and one male athlete each year from six universities joined the international programme then there would be real hope of building a strong group of under-23 heavyweights.

The women’s side in heavyweight rowing is the stronger at the moment.

Women coaches at the top level are still relatively rare. Top coach Laryssa Biesenthal will address this when she gives a set of workshops in Ireland next week. She is in Belfast on Thursday March 22nd; Galway on Friday; Dublin on Saturday at lunchtime and Cork (NRC) on Saturday evening.